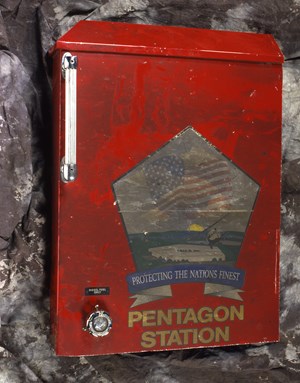 The Smithsonian’s National Museum of American History is presenting “September 11: An Evolving Legacy” to commemorate the 20th anniversary of the attacks and to continue fulfilling its congressionally designated responsibilities to document the events of that day and the aftermath.

The Smithsonian’s National Museum of American History is presenting “September 11: An Evolving Legacy” to commemorate the 20th anniversary of the attacks and to continue fulfilling its congressionally designated responsibilities to document the events of that day and the aftermath. The 20th anniversary web portal includes a story-gathering web tool for the public to share their stories, links to a series of three virtual panel discussions and a website featuring new collections as well as artifacts and photos from the museum’s collection of record. A few of the museum’s Sept. 11 collections, including twisted steel beams from the World Trade Center, are on permanent display.

In 2002, the U.S. Congress charged the museum with preserving the Sept. 11 story, and it became the official repository for artifacts covering the three sites of the attacks (New York, Washington, D.C., and Pennsylvania) as well as the effects on American life. Understanding Sept. 11 has been an ongoing museum effort and new collections continue to be added, including a recent Latina/o collecting project in 2020–21 and a continued initiative to add to the Photo History Collection.

“After two decades, we continue to feel the lasting and complex personal, national, and global ramifications of the terrorist attacks of Sept. 11, 2001,” said Anthea M. Hartig, the museum’s Elizabeth MacMillan Director. “At the National Museum of American History, we commit to keeping the memory of that day alive by working with a wide range of communities to actively expand the stories of Americans in a post-Sept. 11 world.”

The museum has continued to add artifacts, oral histories and photographs to its Sept. 11 collections. Recent acquisitions document stories from New York’s Latina/o community and include objects such as the jewel-toned blue blouse and black jacket worn by Univision journalist Blanca Rosa Vilchez. Vilchez was near the World Trade Center that morning to cover the city’s primary elections. After witnessing the twin towers’ collapse and running for her life, she continued reporting from the site for several days while wearing these clothes. Another recent acquisition is a sweatshirt worn by Ivonne Coppola Sanchez, an EMS with the Fire Department of New York, who helped set up a makeshift morgue at Ground Zero. An object list related to the museum’s New York City Latino 9/11 Collecting Initiative is available.

Over the past 10 years, the museum’s photographic history collections has added more than 160 images to the permanent collections to help shape the public’s understanding of that tragic day and reveal outcomes of how national decisions can impact ordinary lives. Among the additions are 14 gelatin silver prints from Ashley Gilbertson’s book project, “Bedrooms of the Fallen,” that connect to the pain and loss of young U.S. soldiers and Nina Berman’s work documenting the arrival of the Department of Homeland Security into American communities as well as her depictions of military service.

Among the collections on permanent view are a twisted steel beam from the South Tower along with a Flight 93 airphone and Naval Commander Patrick Dunn’s Pentagon ID cards, which are in the “Price of Freedom: Americans at War” exhibition. The “American Enterprise” exhibition includes Rudy Giuliani’s cell phone and a Sikh turban worn by Balbir Singh Sodhi, the victim of a hate crime outside his Arizona gas station.

The story-gathering tool, “September 11: Stories of a Changed World,” will provide users with ways to recount their experiences of that day, the days and years that followed and the lasting effects on their lives. The portal presents a yearlong opportunity for the public to share their memories, in either English or Spanish and these stories will form the basis of a digital archival collection. Users may select from various categories, including the three geographic sites and service roles such as first responders, military members and community organizations. Sample questions such as “How did you experience Sept. 11” and “How has it felt to live in a post-Sept. 11 world?” will provide users with a framework to help tell their story.

Under the theme of “Hidden Stories, Hidden Voices,” three live virtual panel discussions will explore stories not typically told in the arc of Sept. 11, including those related to New York’s Latina/o and Chinese American communities as well as how artists from these communities have portrayed the attacks and their impact. Programming began Sept. 1 with “Hidden Stories, Hidden Voices: Portraits of Manhattan’s Chinatown” and continues Sept. 9 with “Hidden Stories, Hidden Voices: Art in the Aftermath” and “Hidden Stories, Hidden Voices: Latinx Empowerment After the Attacks” Sept. 10. Each program takes place from 7–8:30 p.m. ET with free registration. CART captioning is available in English, Spanish and Simplified Chinese for the live programs. The recorded programs will be re-released with English, Spanish and Simplified Chinese captions. The program series is produced in collaboration with museum and community partners: the Museum of the Chinese in America, the Charles B. Wang Community Health Center, El Museo del Barrio, the Consulate General of Mexico in New York, the Mexican Cultural Institute in Washington, D.C., and the New York Committee for Occupational Safety and Health.

About the National Museum of American History

Through incomparable collections, rigorous research and dynamic public outreach, the National Museum of American History seeks to empower people to create a more just and compassionate future by examining, preserving and sharing the complexity of our past. The museum, located on Constitution Avenue N.W., between 12th and 14th streets, is open Friday through Tuesday between 10 a.m. and 5:30 p.m. Admission is free. The doors of the museum are always open online and the virtual museum continues to expand with offerings, including online exhibitions, K–12 educational materials and programs. The public can follow the museum on social media on Twitter, Instagram and Facebook. For more information, go to https://americanhistory.si.edu. For Smithsonian information, the public may call (202) 633-1000.