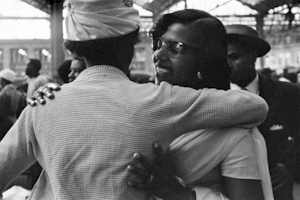 The Windrush Monument will be a permanent tribute to a generation of arrivals from the Caribbean to Britain – from the arrival of MV Empire Windrush in 1948 and in the decades that followed.

The four artists in the running to design the national Windrush Monument at Waterloo station have been revealed. The Windrush Monument will be a permanent tribute to a generation of arrivals from the Caribbean to Britain – from the arrival of MV Empire Windrush in 1948 and in the decades that followed. It will recognise how the Windrush Generation have enriched our nation’s history and made invaluable contributions to all aspects of British life, from our health and transport services to our politics, businesses, literature and culture.

The shortlisted artists are all of Caribbean descent and include world renowned, established and emerging artists working across the visual arts. They include:

Sculptor and painter Basil Watson who has designed public sculptures and monuments across the world including statues of Martin Luther King, Usain Bolt and Merlene Ottey. He was awarded the Order of Distinction (Commander Class) in 2016 by the Jamaican government in recognition of his artistic accomplishments. His family is part of the Windrush Generation.

Jeannette Ehlers uses a mixture of photography, video, installation, sculpture and performance in her work. Her work addresses complex questions about memory, race and colonialism, influenced by her Danish Trinidadian heritage. In 2018 Ehlers was the co-creator of a significant public memorial in Copenhagen to Mary Thomas (a 19th century slavery freedom fighter), in collaboration with the Crucian artist La Vaughn Belle.

Daughter of Windrush generation pioneers, Valda Jackson works in sculpture, painting, printmaking and moving image creating complex narratives that reflect and question our past and present with intent on influencing our future. In 2017, her collaborative public art practice ‘Jackson and Harris’ won the Marsh Award for excellence in Public Sculpture from the Public Monuments and Sculpture Association.

London Waterloo station is strongly associated with the stories of many members of the Windrush Generation. It stands at a point where thousands of Windrush pioneers first arrived in London before starting new lives across the UK.

The monument will be an ambitious public artwork that stands as a testament to the contribution of Caribbean pioneers in communities across the United Kingdom. It will create a permanent place of reflection and inspiration and be a visible statement of our shared history and heritage.

Chair of the Windrush Commemoration Committee Baroness Floella Benjamin DBE said: We are entering a really exciting stage of this project with the realisation of the monument just around the corner. Our shortlist contains a vibrant mix of talented artists, all with lived experience of the Windrush legacy and we will now see proposals developed into a vision for the national monument to the Windrush Generation in London Waterloo station.

The monument will be a permanent place of reflection and inspiration for Caribbean communities and the wider public, especially children. It will act as a symbolic link to our past, and a permanent reminder of our shared history and heritage for generations to come.

Communities Minister Lord Greenhalgh said: Over 70 years ago, when the first passengers on MV Windrush disembarked at Tilbury Docks, it marked an extraordinary moment in the history of modern Britain. The Windrush generation and their descendants have gone on to play an important role in every area of British life, helping to shape the society we are so proud of today. I look forward to seeing the designs that these exciting artists will produce to celebrate and honour their contribution to our nation’s vibrant history, right at the centre of our nation’s capital.

The artists will now be asked to develop their ideas into a maquette, model or drawings to illustrate their design. Each shortlisted artist will present their proposal via a short film, which will be shared nationally with a focus on the British Caribbean community.

The winning design is planned to be revealed in Black History Month in October and the monument is expected to be unveiled on Windrush Day 2022.