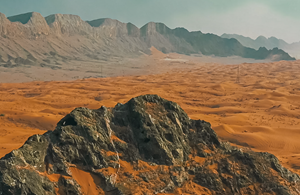 Conceived by the late Okwui Enwezor and curated by the Foundation’s Director Hoor Al Qasimi, Sharjah Biennial 15: Thinking Historically in the Present reflects on Enwezor’s visionary work, which transformed contemporary art and has influenced the evolution of institutions and biennials around the world, including the Sharjah Biennial.

Sharjah Art Foundation (SAF) has announced a list of over 150 artists from more than 70 countries participating in the 15th edition of the Sharjah Biennial. Conceived by the late Okwui Enwezor and curated by the Foundation’s Director Hoor Al Qasimi, Sharjah Biennial 15: Thinking Historically in the Present reflects on Enwezor’s visionary work, which transformed contemporary art and has influenced the evolution of institutions and biennials around the world, including the Sharjah Biennial. Presented at more than 16 venues across the emirate of Sharjah, including a vegetable market, power station and former kindergarten, the Biennial features many never-before-seen works, including 30 major commissions. Free and open to the public, Sharjah Biennial 15 runs 7 February through 11 June 2023, with opening week events from 7 February to 12 February.

“Owkui saw Sharjah Biennial’s 30-year anniversary as an opportunity to reflect on the role that biennials serve in the ecosystem of contemporary art, particularly the Sharjah Biennial itself and the broader Foundation that grew from it. With gratitude to Okwui and the ambitious intellectual project he conceived, we are organising a Biennial that builds on and honours his vision to probe the past, present and future role that biennials and institutions, including the Sharjah Biennial and the Foundation, can serve. We look forward to welcoming local audiences and visitors from around the world to reflect on the themes the Biennial explores and the wide-ranging perspectives of the participating artists,” said Al Qasimi.

For Enwezor, the contemporary art exhibition provided a means to engage with history, politics and society in our global present. He envisioned the invitation to curate this edition of the Sharjah Biennial as a way to contribute to the Biennial’s history and that of the overarching Foundation, as well as a means of exploring their role in addressing the need for institutional models outside of the West that support contemporary art production, presentation and dialogue that is responsive to our times. To mark the Sharjah Biennial’s 30-year anniversary, Enwezor proposed commissioning 30 works for the Biennial as a way to meaningfully activate this critical platform through the development of new work. In line with this framework, 30 artists have been invited to embark on major commissions that explore histories that continue to shape our present: John Akomfrah, Kader Attia, Sammy Baloji, María Magdalena Campos-Pons, Carolina Caycedo, Destiny Deacon, Manthia Diawara, Coco Fusco, Hassan Hajjaj, Mona Hatoum, Lubaina Himid, Isaac Julien, Amar Kanwar, Bouchra Khalili, Mohammed Ibrahim Mahama, Kerry James Marshall, Steve McQueen, Almagul Menlibayeva, Aline Motta, Wangechi Mutu, Philippe Parreno, Doris Salcedo, Berni Searle, Yinka Shonibare, Vivan Sundaram, Fatimah Tuggar, Hajra Waheed, Barbara Walker, Nari Ward and Carrie Mae Weems.

As another integral part of Enwezor’s plans, the 2022 and 2021 iterations of March Meeting – the Foundation’s annual convening of artists, curators and arts practitioners to explore critical issues in contemporary art – served as a collective prelude to the upcoming Sharjah Biennial 15. March Meeting 2021: Unraveling the Present examined the 30-year history of the Sharjah Biennial and the future of the biennial model; while March Meeting 2022: The Afterlives of the Postcolonial examined the legacies of colonialism and the contemporary impacts of related issues on cultural, aesthetic and artistic practices around the world. March Meeting 2023 continues the exploration of the Sharjah Biennial 15 themes while the exhibition is on view, from 9 March through 12 March 2023.