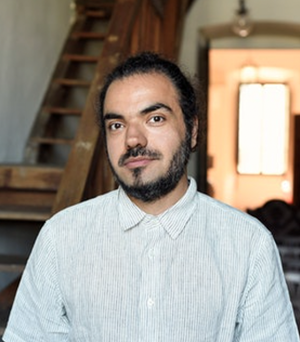 The recipient is the Frist Art Museum (FAM) in Nashville, Tennessee, and the award will assist in funding the first solo museum exhibition of Iranian-born artist Shahpour Pouyan in the United States.

Foundation for Contemporary Arts (FCA) has named the 2022 recipient of The Ellsworth Kelly Award, a $45,000 annual grant to an institution to support a solo exhibition of a contemporary visual artist. The recipient is the Frist Art Museum (FAM) in Nashville, Tennessee, and the award will assist in funding the first solo museum exhibition of Iranian-born artist Shahpour Pouyan in the United States. Encompassing a wide variety of media, Pouyan’s work uses the language of armaments and monumental architecture to confront and critique political power. Opening in the summer of 2024, the exhibition was conceived by FAM Senior Curator Trinita Kennedy as a triptych across three galleries—featuring a series of mixed media drawings, a large group of ceramic sculptures in architectural forms, and the debut of an immersive installation using virtual reality and climate control to evoke a fictional mosque. Ellsworth Kelly recognized how transformative an in-depth solo exhibition could be for an artist’s career; as well as the role that U.S. regional museums and university and college art galleries play in creating such opportunities. This by-invitation, annual grant is intended to support an institution in providing this type of exhibition to an under-recognized, emerging, or mid-career artist. The program was created during Ellsworth Kelly's lifetime and endowed by the Ellsworth Kelly Foundation; the selection process and award are administered by FCA. This year, the grant increased from $40,000 to $45,000. Applications in this cycle were solicited from a small number of institutions on the eastern side of the U.S.; in 2023, applications will be solicited from institutions in the western side of the country.

Both Pouyan and FAM see this exhibition as an opportunity to create cross-cultural dialogue. Iran and the United States have not had diplomatic relations since 1980, and in many American cities there are few opportunities to learn about Iranian culture. “Pouyan’s work is astonishing for its intense beauty, sophistication, and virtuosity,” said curator Trinita Kennedy. “While his art is political, Pouyan never announces his agenda, leaving the door open for dialogue and understanding.”

FAM’s proposed exhibition of Shahpour Pouyan was selected by FCA’s Board of Directors, including Cecily Brown, Anne Collier, Anthony B. Creamer III, Jasper Johns, Jennie C. Jones, Julian Lethbridge, Dean Moss, Emily Wei Rales, Matana Roberts, James Welling, and John Yau. In selecting the award, FCA’s Directors seek projects that are in the earliest stages of planning at the time of review and require the financial catalyst provided by The Ellsworth Kelly Award to propel them from planning to realization. “We are delighted that the 2022 Ellsworth Kelly Award will help bring such an ambitious and considered presentation of Shahpour Pouyan’s work to U.S. audiences,” said Kay Takeda, Executive Director of the Foundation for Contemporary Arts. “The Frist Art Museum’s exhibition reflects Ellsworth Kelly’s belief in the transformative power of a museum exhibition for an artist—featuring Pouyan’s artistic concerns over three distinct and thematically connected projects, including the artist’s first virtual reality installation.”

About Shahpour Pouyan
Shahpour Pouyan (b. 1979) was born in Iran and currently lives in London. He uses historical events and conflicts as a metaphor to address the abusive relation of political power with religion, heritage, and the environment in today’s world. Architecture is one of the main elements of his visual vocabulary in addition to archaeology, armor, medieval art, and Persian painting. Encompassing a wide variety of media, Pouyan’s work transforms historical and political issues into poetic visual form.

The artist earned degrees in math and physics, philosophy, and painting in Tehran prior to receiving an MFA in New Forms and Integrated Practices from Pratt Institute, Brooklyn, NY (2012).