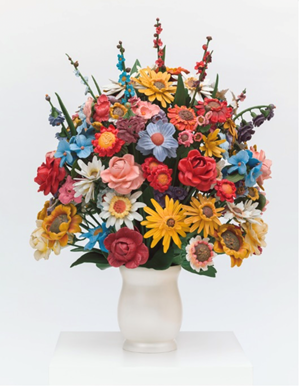 The San Francisco Museum of Modern Art (SFMOMA) has announced the landmark gift of nearly 350 paintings, sculptures, drawings, photographs, design objects and media art works from the Estate of Norah and Norman Stone.

The San Francisco Museum of Modern Art (SFMOMA) has announced the landmark gift of nearly 350 paintings, sculptures, drawings, photographs, design objects and media art works from the Estate of Norah and Norman Stone. A monumentally important collection of cutting-edge modern and contemporary art, the Stones’ gift includes works by a diverse and exceptional range of artists including Diane Arbus, Hans Bellmer, Marcel Duchamp, Jeff Koons, Sarah Lucas, Bruce Nauman, Francis Picabia, Sigmar Polke, Richard Prince, Cindy Sherman, Andy Warhol, Carrie Mae Weems, Ai Wei Wei and Danh Vo, among many others. Included in the gift is an over $10 million unrestricted bequest, which will establish The Norah and Norman Stone Fund for Exhibitions of Contemporary Art, dedicated to supporting future exhibitions and collection displays at SFMOMA. The significant funding and major group of works will dramatically expand SFMOMA’s holdings of contemporary art after the gift goes through the museum’s board approval process, enabling SFMOMA to meaningfully advance its mission to share the art of our time.

“Norah and Norman have made a breathtaking and exemplary gift to the museum they loved so much. Longtime friends and trustees, the Stones’ generosity will sustain SFMOMA’s commitment to contemporary art, both in our collection displays and our special exhibitions,” said Neal Benezra, Helen and Charles Schwab Director of SFMOMA. “Their legacy of generosity is matched only by their marvelous personal style, passion for life and all that is new in contemporary art. We are profoundly grateful to them.”

The Stones began collecting art in the 1980s. With the early guidance of former SFMOMA curator of painting and sculpture, John Caldwell (1942–1993), the Stones developed their passion for thought-provoking, vanguard contemporary art, and collecting became a key focus of their lives. In the late 1980s, the Stones became increasingly interested in young artists such as Matthew Barney, Robert Gober, Mike Kelley, Jeff Koons, Richard Prince and Cindy Sherman. Collecting was a joint effort for the couple—“Collecting brings us closer together…” Norah Stone said in a 2016 interview with Architectural Digest. “You won’t always agree, but you know you have to make decisions. That’s life really.”

With a growing dedication to art, Norman joined the SFMOMA Board of Trustees in 1991, followed by Norah in 2009. Norah also served as an SFMOMA docent, and the couple dedicated copious time to numerous SFMOMA board committees and auxiliaries. Their longterm commitment to SFMOMA was additionally illustrated by their involvement with the Campaign for Art which helped generate gifts of over 3,000 works of art—including their own contributions of work by John Baldessari, Joseph Beuys and Jeff Koons, among others—in celebration of the expanded museum’s opening in 2016.

“Norah and Norman’s gift to SFMOMA is a true expression of their love for and dedication to the museum and the city of San Francisco,” said the Stones’ daughter, Amy Stone. “They deeply valued how art can inspire, move and connect people. We hope their gift will help keep their love of contemporary art alive for years to come.”

Highlights of the Stone Collection include several seminal works by Marcel Duchamp, such as Objet-dard, L.H.O.O.Q. and Feuille de vigne femelle; selections by Andy Warhol including Nine Shoes and Six Oxidation Paintings; the celebrated Two Ball Tank and Large Vase of Flowers by Jeff Koons, which greeted visitors on SFMOMA’s Floor 7 galleries during the 2016 reopening of the museum upon its expansion; standout photographs such as Catherine Opie’s Bo, Carrie Mae Weems’ Kitchen Table and Cindy Sherman’s Film Still; and thought-provoking conceptual works such as Ai Wei Wei’s Fairytale Chairs and Danh Vo’s FedEx.

The Stones’ generous $10 million bequest will help fund contemporary art exhibitions at the museum, beginning with two 2022 presentations opening April 9. Shifting the Silence will feature works by 32 women artists who use the radical, experimental and powerful language of abstraction to explore the world. Speculative Portraits will feature contemporary artists who draw from scientific research and technology to expand on ideas of portraiture, identity and human presence.