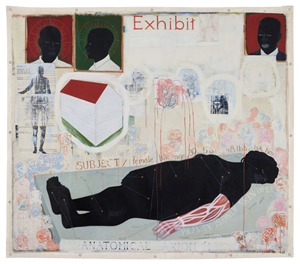 Executed in 1993, Beauty Examined is a pivotal example of Marshall’s revolutionary synthesis of formal rigor and social critique, which seamlessly weaves text, found imagery, and art historical references with motifs of the artist’s own invention to examine the complex intersections of art history, aesthetic culture, and scientific racism.

Following Sotheby’s inaugural iteration of The Now Evening Auction in New York in November 2021, which was 100% sold, the sale series returns to New York this May anchored by Kerry James Marshall’s exceptional Beauty Examined, a powerful and historically resonant large-scale work critiquing the anatomical dehumanization of Black bodies throughout Western art and culture. Executed in 1993, the same year as the artist’s debut solo exhibition at Jack Shainman Gallery in New York, Beauty Examined is a pivotal example of Marshall’s revolutionary synthesis of formal rigor and social critique, which seamlessly weaves text, found imagery, and art historical references with motifs of the artist’s own invention to examine the complex intersections of art history, aesthetic culture, and scientific racism.

Drawing on a wide range of art historical and cultural influences, such as Andrea Mantegna’s Lamentation of Christ, Rembrandt’s Anatomy Lesson of Dr. Nicolaes Tulp, Thomas Eakin’s The Gross Clinic, Leonardo da Vinci’s anatomical drawings, and 19th century ethnographic studies, Beauty Examined is a powerful critique of the Western art tradition, fusing these references into a singular image that spotlights the historical subjugation of the Black female body and lays bare the brutality of the gaze to which it has been subjected.
As a star lot of The Now Evening Auction on 19 May, Beauty Examined will be offered at auction for the first time with an estimate of $8–12 million. The sale this May also marks the most significant work by Marshall to come to auction since Sotheby’s record-setting sale of Past Times in 2018, which sold for $21.1 million to Grammy Award-winning record producer and entrepreneur Sean Combs.

Proceeds from the sale of Beauty Examined will benefit the Institute for Genetics and Translational Genomics at California’s Loma Linda University, where the painting has resided since 2019 as a gift of alumnus Dr. Charles Sims. Noting its themes of anatomy and the historical study of the body, Dr. Sims’ gift to the university showcased the dialogue between the painting and Loma Linda’s mission-focused educational vision to transform lives through selfless service, including its innovative medical research and healthcare programs.

Making its auction debut this May, Beauty Examined has not been on the market since its initial acquisition by Dr. Sims in 1993, who then gifted the work to Loma Linda University in 2019. As both a resounding manifesto and an emotional spotlight on the scrutiny to which Black women’s bodies have been subjected for centuries, Beauty Examined is an exceptional example of Marshall’s acclaimed contributions to art history, reconfiguring and interrogating the accepted modes of representation. As a testament to the significance of Beauty Examined within Marshall’s prodigious career, the painting was one of the most critically and publicly lauded works that was selected for Kerry James Marshall: Mastry, the major mid-career survey that ran from 2016 – 2017 that was co-organized by the Museum of Contemporary Art in Chicago, the Metropolitan Museum of Art in New York, and the Museum of Contemporary Art in Los Angeles.