Rubens Museum House, Antwerp to Commence Shut Down in 2023 for 4 Years for Redevelopment Purposes 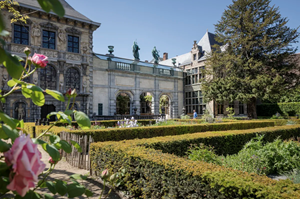 The planned redevelopment of the Rubens House - with a new reception building in Hopland and a newly laid out garden - has now been expanded to include a refurbishment of the museum itself. The Rubens House will be open up to and including 8 January 2023 but will remain closed for a longer period.

The planned redevelopment of the Rubens House - with a new reception building in Hopland and a newly laid out garden - has now been expanded to include a refurbishment of the museum itself. The Rubens House will be open up to and including 8 January 2023 but will remain closed for a longer period. It will welcome visitors again in 2027, the year in which we celebrate the 450th anniversary of Rubens’ birth. The new-build in Hopland will open in 2024 as originally planned.

The Rubens House has been discreetly building the future behind the scenes.  The planned reception building in Hopland by Robbrecht & Daem Architects constitutes a first, major step toward the 21st century. The contemporary facilities will resolve many of the problems or shortcomings that visitors, researchers and employees currently experience.

With the revamp of the artist’s home in Wapper, the Rubens House is also renovating his largest masterpiece. The restoration will create more space for visitors and international exhibitions. The museum will also be fitted with optimised climate control, that meets the highest standards. We will combine passive measures and sustainable techniques to optimally manage the indoor climate of this historic dwelling. A comprehensive restoration of the museum’s interior will enhance the experience while the addition of a lift means the museum will become largely accessible for people with disabilities. All the interventions will take place within the existing walls with the greatest care.

The overall renovation of the museum means there is also a change in timing. Work will commence on the new-build in Hopland in spring 2022. From autumn onwards, the middle section of the garden will also be redeveloped. The Rubens House will remain open during these works, up to and including 8 January 2023. The restoration of the museum will start once the museum has closed.

In April 2024, the new-build in Hopland will open to the public, as originally planned. Until 2027, visitors will be able to enjoy some of the masterpieces from the museum’s collection in the new building. The museum café will be completed in 2027. Until then, the first floor of the new-build will serve as a creative hub where people can meet and contribute to the story and experience of the new Rubens House.

In 2027, the doors to the artist’s home will reopen and the Rubens House will celebrate the 450th anniversary of the master painter’s birth.

The public can visit the Rubens House up to and including 8 January 2023. The museum galleries and the garden will remain open. The works in Hopland will, however, cause some noise nuisance for visitors. From autumn onwards, access to the garden will be limited following the start of the redesign.

The Rubens House still has plenty of treats in store for visitors this coming year, including several (COVID-safe) events in the summer and winter. Everyone will thus be able to enjoy this magnificent house and garden, before the museum closes for four years.