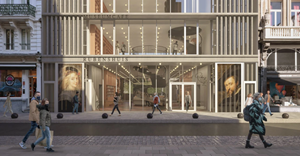 Robbrecht and Daem Architects have designed a new Rubens-inspired reception building for the Rubens House. Located on Hopland, it will stand discreetly and to one side of Rubens’ celebrated sight-line from the portico to the garden pavilion.

Robbrecht and Daem Architects have designed a new Rubens-inspired reception building for the Rubens House. With a multimedia experience centre, a museum café, a reading room and the Rubenianum’s extensive library collection, the design is an important link in the future vision for the Rubens House and the Rubenianum. Located on Hopland, it will stand discreetly and to one side of Rubens’ celebrated sight-line from the portico to the garden pavilion. The Rubenianum, which houses the most extensive documentation and library on early-modern Flemish art in the world, is also the focus of growing interest on the part of researchers and has clearly outgrown its facilities. Completion of the conservation of the portico and garden pavilion formed a new milestone in the history of the Rubens House. The rest of the site now calls for a similar approach: with absolute respect for Rubens’ work and a sense of innovation worthy of this great Baroque master. The City of Antwerp and Robbrecht and Daem Architects (partly in collaboration with Callebaut Architects) have drawn up a new vision for the future that reinforces the heritage values, relieves pressure on the site and puts the figure of Peter Paul Rubens centre stage once again. 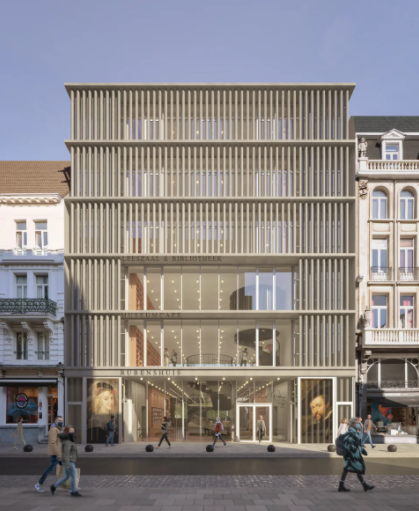 A new reception building is planned for 13 Hopland, located behind the current garden wall along that street, between two taller buildings. 13 Hopland will be a very accessible reception building, equipped with all necessary visitor facilities. It will house a multimedia experience centre on Rubens and the locale where he lived and worked, the research institute’s public reading room, the library and a great many back-office functions. Robbrecht and Daem Architects have designed the newbuild within a total vision for this protected heritage site and in open dialogue with the Flanders Heritage Agency and the City of Antwerp. They have sought the right proportions for the new facade on Hopland and the Rubens Garden side, structured from horizontal lines and vertical cylindrical elements to reference the rich building traditions of Italian palazzi. The new facades thus form a uniform whole, which responds in turn to the facade of the Rubens House. Where the existing city block turns its back on the garden, 13 Hopland aims to provide the garden with a facade that interacts with the one the Rubens House itself presents. This new facade will be designed in an abstract way that will not detract from the prestigious Rubens House. The use of round elements will create a fascinating play of light in the building, both during the day and at dusk and at night. 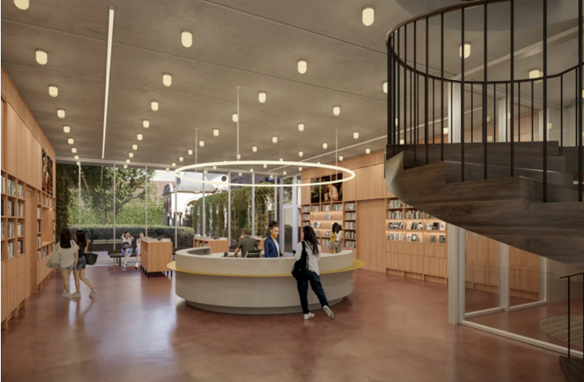 The contemporary building is planned for the site where Rubens installed his extensive and prestigious library in 1639 and features numerous references to him. The multitude of columns, for instance, evokes the ‘musculature’ or ‘corporeal identity’ of Rubens’ oeuvre. His penchant for large diagonals, meanwhile, translates into the building’s geometry and circuit. This is never perpendicular, but moves from one diagonal to another, as in the configuration of the spiral staircases. The homely aspect of this unique spot is encompassed in the two gigantic bookcases that face one another over a height of six storeys. These two flanks create a certain domesticity in both the building’s public reception areas and its working and research zones. The new building is six floors high and attractively implanted within Hopland’s existing urban structure. Despite its size, it will form a restrained relationship with the rest of the site: it avoids the major sight-lines and adopts a discreet stance through its lateral positioning. The new reception building will serve as an introduction to the master’s universe.

The new building at 13 Hopland provides breathing space for the entire site, as well as a new routing that will increase and deepen understanding of Rubens’ work and life. From Wapper – where the temporary pavilion will disappear and there will once again be an unobstructed view of the façade – visitors will move towards the new building. Time and space will be offered there to leave the twenty-first century behind and to move steadily deeper into Rubens’ living and working world. In the experience centre, visitors will be immersed in the vibrant universe in which Rubens lived and worked. They will then exit 13 Hopland via the garden to enter the studio wing on the left in search of the artist in the bustling activity of the large studio and the pupils’ studio in the Italian wing, and then of Rubens’ private life in the Flemish wing. Having exited the artist’s residence, visitors will find themselves face to face with the breathtaking portico and garden pavilion. The final stage leads through the garden back to reception.

In addition to Robbrecht and Daem’s interventions, the museum garden will be completely redesigned as a central connecting element, with respect for the past as well as responding to new needs. The new design will be a distinctive evocation of the seventeenth century, bounded by garden paths and leafy passageways. The choice of plants will refer back to varieties used in Rubens’ time. The whole thing will be an example of innovation rooted in tradition.

Interventions will be inevitable in the artist’s residence too to alleviate the pressure and preserve the museum for future generations. Fundamental changes are not always possible due to the building’s historic character. But smart, surgically precise interventions can eliminate many of the problems. The master plan sets out to optimize climate control, experience and accessibility.

The future vision applies to the entire Rubens House site: the artist’s residence, the garden and the adjoining Kolveniershof. It will improve the infrastructure and give the site back the lively and inspiring atmosphere it had in the seventeenth century. Rather than buildings or functions, the focus will be on Rubens himself. This future vision also links the Rubens House and Rubenianum with one another both physically and substantively. The institutions will become a single organization. The Rubens House will be entirely ready for the future by 2024, thanks to the interplay between the new building, the new routing, the newly laid-out garden and the modified artist’s residence.

An important lever for the development of this future vision is a grant from Tourism Flanders of just under 3 million euros. The subsidy is a contribution to a total vision for the artist’s home and surroundings, drawn up in close consultation with the Flanders Heritage Agency. The City of Antwerp is backing the integrated plan with a generous investment. Some 17 million euros will be spent on construction work in the current policy period. Building will commence in the autumn of 2021 and will be carried out in phases. The overall project is scheduled for completion in 2024.