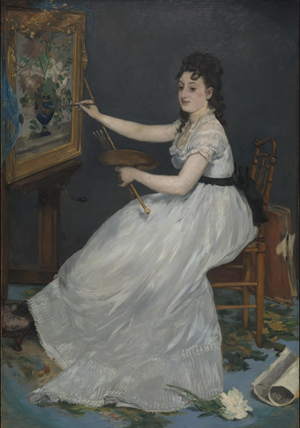 In 2022, the National Gallery will stage an exhibition Discover Manet and Eva Gonzalès devised around The Portrait of Eva Gonzalès (1870) by Édouard Manet (1832 –1883), the first UK exhibition devoted to Eva Gonzalès (1849–1883). The painting was acquired by Hugh Lane and considered by the early 20th-century as the most famous modern French painting in the UK and Ireland.

This will be the first in a new series of ‘Discover’ exhibitions in the Sunley room which aim to reveal well known paintings through a contemporary lens. The exhibitions will explore a single work from unexpected angles, shedding new light on prominent and beloved paintings from the collection. To begin the series, the exhibition takes Manet’s 'Portrait of Eva Gonzalès' as its focus, presenting a fresh perspective on women artists and their artistic practice. in 19th century Paris and more broadly.

The exhibition is organized with the Hugh Lane Gallery in Dublin and opens there before coming to London, celebrating the friendship and renewed spirit of cooperation between the two institutions following the new partnership agreed in 2021 regarding the 39 works in the Sir Hugh Lane Bequest*.

Though regarded as the father of modernism and a figurehead for the Impressionist generation, Manet only ever had one formal pupil, Eva Gonzalès. The daughter of a prominent writer, she entered Manet’s studio in 1869, at the age of 22. By the time of her death fourteen years later, following childbirth, she had become an established artist in her own right, her work regularly exhibited at the Salon.

An important section of the exhibition will present the findings of a new campaign of technical examination, indicating that Manet restarted the face dozens of times. The X-radiograph reveals parts of an earlier face that was rounder, with the curls on her forehead closer together. It also shows, for the first time, a little pot of brushes on the floor which was later painted over in alignment with Manet’s striving for simplification and clarity of design. X-ray fluorescence (XRF) tells us that Manet also reworked the dress, the chair, and the orientation of the easel. These findings confirm the account that fellow artist Berthe Morisot (1841-1895) gave of the portrait’s progress in a riveting series of letters to her sister. This provides insight into on Manet’s famously laborious process, in which scraping back and repainting was usual, but always disguised with spontaneous gesture and bravura handling.

'Portrait of Eva Gonzalès' becomes a gateway into women’s artistic practice and the representation and self-presentation of women artists in 19th-century Paris and more broadly. Self-portraits from the 18th to the 20th century will be brought together with depictions of women artists by men to explore different constructions of gender, status and talent. The exhibition will also provide a window into Manet and Gonzalès’s lifelong artistic dialogue, delving into the complex mixture of mentorship, admiration, and emulation that underpinned their friendship.

Exhibition is organised by the National Gallery and Hugh Lane Gallery.