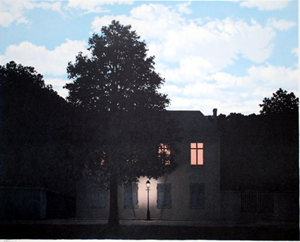 One of the most desirable works of modern art in private hands, and among the definitive images of Surrealist art, René Magritte’s L’empire des lumières captures the visual paradox that lies at the heart of the artist’s originality.

One of the most desirable works of modern art in private hands, and among the definitive images of Surrealist art, René Magritte’s L’empire des lumières captures the visual paradox that lies at the heart of the artist’s originality. The instantly recognisable work was created in 1961 for Baroness Anne-Marie Gillion Crowet, the daughter of Magritte’s patron the Belgian Surrealist collector Pierre Crowet, and has remained in the family ever since. Anne-Marie embodied Magritte’s aesthetic ideal, even before he actually met her. Uncannily, her likeness is found in a number of works executed before their first meeting, when he famously said to her: “Tu vois, je te peignais déjà avant de te connaître”. Thereafter she became a lifelong friend of Magritte and his wife Georgette, appearing in many of the artist’s most significant paintings. With an estimate in excess of $60 million, this masterpiece of twentieth century art will be offered as the star of Sotheby’s Modern & Contemporary Evening Auction in London on 2 March.

Exhibited worldwide in Brussels, Rome, Paris, Vienna, Milan, Seoul, Edinburgh and San Francisco, L’empire des lumières was most recently on loan to the Musée Magritte in Brussels from 2009-2020, surrounded by the finest collection of Magritte paintings in the world. Prior to the auction, the painting will be publicly exhibited in Sotheby’s galleries in Los Angeles, Hong Kong, New York and London (full exhibition schedule below). Anne-Marie Gillion Crowet & Magritte Magritte’s first meeting with Anne-Marie, when he recognised her as the embodiment of the muse that already inhabited his imagination, took place when she was 16 years old and he was asked to paint her portrait. In the years that followed, her face, now known to him by name, continued to appear in many of his major paintings.

From their first meeting, the pair formed a close bond, with the artist sending her little drawings and showing her his latest paintings, even painting one for her on the occasion of the birth of her daughter. Well and truly a part of his inner world, Anne-Marie would play chess with the artist at his favourite bistro and spend evenings with the family watching Charlie Chaplin and Buster Keaton movies. Together with her husband Roland, Anne-Marie is a key figure in Belgium’s cultural scene: their Art Nouveau collection has been donated to the Royal Museums of Fine Arts of Belgium (where it occupies an entire floor).

The Dominion of Light Magritte first started work on a version of this subject in 1948, returning to the idea numerous times over the next decade, carefully reimagining and enriching each new composition. The resulting group of seventeen oils titled L’empire des lumières constitute Magritte’s only real attempt to create a ‘series’ within his oeuvre. The works evolved over time whilst still speaking to one another, much in the same way as Vincent van Gogh’s starry nights and Claude Monet’s waterlilies. The series was an immediate hit with the public and collectors alike – with the first version bought by Nelson Rockefeller and examples now held in the Peggy Guggenheim Collection, Venice, the Museum of Modern Art in New York, The Menil Collection, Houston and the Royal Museums of Fine Arts of Belgium, Brussels. This example is among the greatest in scale, measuring 114.5 by 146cm., 45 by 57½in., the largest in a horizontal format. The subject may have been inspired by André Breton’s poem L’Aigrette, which Magritte knew well, with the verse opening: ‘Si seulement il faisait du soleil cette nuit’ (‘If only the sun were to come out tonight’). The uncanny combination of a dark, night-time street underneath a bright blue sky is typical of Magritte’s unsettling Surrealist imagery – in which two seemingly incompatible things are brought together to create a “false reality”. The suburban setting itself is recognisable, depicting a quiet street near the Parc Josaphat in Brussels where the artist had moved in 1954. Surrealist art and filmmaking were inextricably linked, and this majestic image is arguably the most cinematic of all of Magritte’s oeuvre. Testament to its arresting power, the work even provided inspiration for a scene in the 1973 Golden Globe-winning classic The Exorcist.