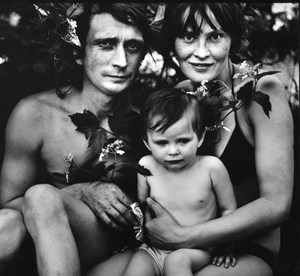 The Deutsche Börse Prize aims to reward a contemporary photographer of any nationality, who has made the most significant contribution (exhibition or publication) to the medium of photography in Europe in the previous year. The projects shortlisted for the 2015 edition are now displayed at The Photographers’ Gallery until 7 June and will subsequently be presented at Museum für Moderne Kunst (Frankfurt). On 28 May the winner of the £30.000 will be announced. This year’s nominees, Nikolai Bakharev, Mikhael Subotzky & Patrick Waterhouse, Zanele Muholi and Viviane Sassen, present a varied spectrum of projects. Their diversity is found not only in the topic of their works, but also in the approach, medium and displays they use.

The Deutsche Börse Prize aims to reward a contemporary photographer of any nationality, who has made the most significant contribution (exhibition or publication) to the medium of photography in Europe in the previous year.

The projects shortlisted for the 2015 edition are now displayed at The Photographers’ Gallery until 7 June and will subsequently be presented at Museum für Moderne Kunst (Frankfurt).

On 28 May the winner of the £30.000 will be announced after being selected by a jury formed by Chris Boot, Executive Director, Aperture Foundation; Rineke Dijkstra, Artist; Peter Gorschlüter, Deputy Director, MMK Museum für Moderne Kunst and Anne Marie Beckmann, Curator, Art Collection Deutsche Börse. Brett Rogers, Director of The Photographers’ Gallery, is the non-voting Chair.

This year’s nominees, Nikolai Bakharev, Mikhael Subotzky & Patrick Waterhouse, Zanele Muholi and Viviane Sassen, present a varied spectrum of projects. Their diversity is found not only in the topic of their works, but also in the approach, medium and displays they use.

Photography, now more than ever, offers the possibility of showing reality from numerous perspectives. Photography is honest, is deceitful, is beautiful and evocative. Especially when approaching the topic of being human, photography becomes a powerful tool, which artists can choose to use in either a direct or symbolic way.

Nikolai Bakharev for the honesty in his portraits. Imperfect bodies in bikinis, straight looks, relaxed attitudes and intimate scenes. At first sight, one can only see pictures of people spending their free time at the beach or at their homes, but after a while we realise that these photographs are the portrayal of freedom and that they are completely sincere. 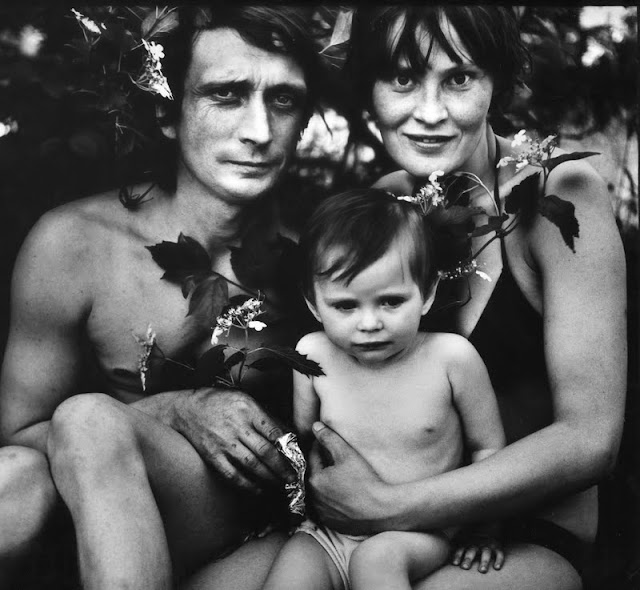 Bakharev found in his photographic practice a way to escape from a social context that didn’t allow him to freely use his medium.  The USSR knew from its beginnings the power of image and communication and in the seventies, when Bakharev started to work as a photographer, images of intimate life were prohibited.

He found his way to develop his own work by photographing bathers, which gave him a space to experiment and provided the models with beautiful pictures for their family albums.

Relationship, the nominated project, was exhibited in 2013 in the 55th Venice Biennale and at the Rencontres d’Arles, and out of all the nominees this is perhaps the work with the most purist and conventional approach to photography. This work is mainly composed of pictures taken during the nineties and eighties, a time when the USSR became more lax towards the independent practice of photography, but yet, daily life wasn’t considered a proper artistic topic and images of almost naked bodies were easily tagged as pornography.

On the contrary, the results of Bakharev’s work are harmonic and almost bucolic black and white images that make the viewer connect immediately with the individuals shown.

Zanele Muholi for tenderly raising awareness of the LGBTI situation in South Africa. At the adjacent room, the social fight takes on major importance. 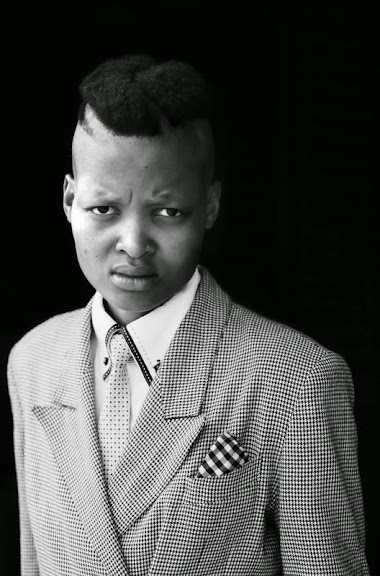 The black and white portraits of LGBTI community that integrate the series Faces and Phases (published by Steidl/The Walther Collection)are displayed unframed all along the wall. Each and every one of the faces on the wall represents a story of violence and fight in South Africa.

Zanele Muholi, who defines herself as a visual activist, co-founded the Forum for Empowerment of Women (FEW) in 2002, and in 2009 founded Inkanyiso, a forum for queer and visual (activist) media.

Through her pictures, Muholi gives a voice to humans who suffer from a triple discrimination: being black, women and gay. Their fight is not only to gain the respect they deserve, but also to prevent more of them from becoming victims of hate crimes.

The camera is for Muholi a tool to point out injustice towards the LGBTI community in South Africa and to publicise the brutal situation, where crimes and curative rapes are common.

Beside the portrait wall there are two videos that illustrate the work developed by the activists collectives. Part of the effort is directed towards making every crime viral. The artist says that she is forced to document, because every time she goes to a funeral she returns home and waits for the next one. But she believes that positive messages are also needed, because communicating violence sometimes brings more violence.

On another wall, there’s a strip of white fabric with handwritten messages from the South African LGBTI community, approximating the project to social protest aesthetics, but also making this project even more collective. All the people shown in Muholi’s exhibition are her people, her family, the people she fights with.

Mikhael Subotzky & Patrick Waterhouse for their ability to extrapolate the history of a building to a country’s social reality.

The Southafrican and Britsh photographers have been nominated for their exceptional publication Ponte City (Steidl, 2014). The project, which was previously exhibited in Les Rencontres d’Arles and won the Discovery award, focuses on the fifty-four-floor building that towers above the neighbourhood of Hillbrow in Johannesburg. 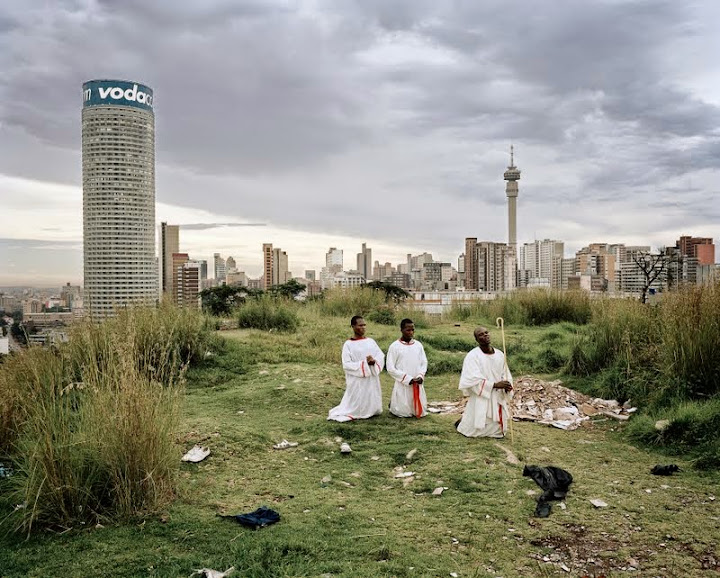 Ponte City was built in 1972, during the Appartheid, when the area was considered aspirational and most of the residents were white young middle-class couples, students and Jewish grandmothers. But in the early nineties, due to political and social changes, most of the population in the neighbourhood moved to safer residential areas. The building was progressively associated with crime, illegal migration and decay, becoming a symbol of the downturn in central Johannesburg.

The structure is impressive: a cylindrical 173 metre high building, with a hollow interior to allow the kitchen, bathrooms and other rooms to have windows (which was compulsory in the seventies). The tip of Ponte City is crowned by a big circular billboard, the largest advertising sign in the Southern hemisphere.

Subotzky and Waterhouse worked together over six years to exhaustively document each of the apartments, looking for stories of the current and past tenants, photographing the surroundings and the interiors.

What they offer is an exceptional multi-format narration. There are colour images of the building and the area, and the unique publication is displayed for the public. On one wall the artists show documents and photography found in apartment 3607: letters, reports, passports. They have pounded old pictures taken in the apartments over the top of current images of the very same spaces. Perhaps the most impressive group of pictures displayed is light boxes of every window, of every internal door, and of every television-set in Ponte City.

All these materials and images allow the viewer to have different approaches to the thousands of stories that the photographers found in this single building, which represent somehow the social and political history of South Africa and all the myths that have surrounded Ponte City.

Viviane Sassen for a beautiful inner vision.  When one enters the last of the four rooms of the Deutsche Börse Prize show, one is immediately transported to a completely different atmosphere, bizarre and mysterious. 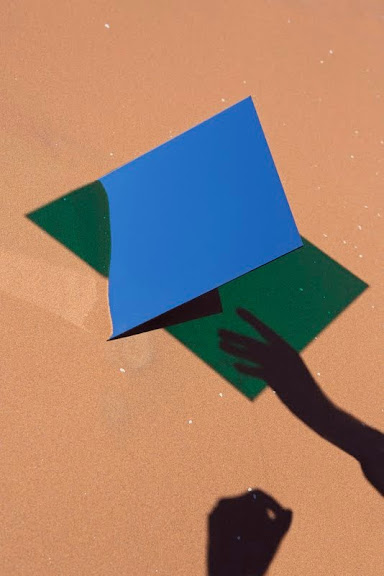 Sassen presents with her images an inner and psychoanalytic vision to the viewer using a combination of colour, mirrors, shadows and light. The project also includes a large video piece, Hurtling, where two arms translate into sign language the poem by Maria Barnes recited through the speakers.

Another video showing endless sand landscape is displayed in a corner creating a right angle with a mirror, which presents a double perspective.

This is the multimedia project UMBRA (shadow in Latin), exhibited at Nederlands Fotomuseum in 2014, with which Sassen experiments mixing vivid colours and light to create abstract shapes and contemplative landscapes and enigmatic scenes.

It is also the project that uses the most pure aesthetic approach. Her message and use of the medium is less direct than her co-nominees, but it implies a reminiscence of her childhood in Kenya. Sometimes light and shadows are the best medium to talk about spaces.

In Sassen’s fashion photographs we can already see a tendency, used again in UMBRA, to hide the faces of the models, allowing their figures to become closer to objects, so she can play with their colours and shadows.

The diversity of mediums, objectives and aesthetics of the shortlisted artists makes it complicated to guess what criteria the jury will use to analyse all the projects. It is difficult to justify how a more social photography project can be compared to a pure artistic and experimental one, or how a multi-format project has contributed more or less than a more conventional format to contemporary art.

We’ll know about the jury’s decision on 28 May and hopefully we will have the answers then. In the meantime, everyone can join the e-debate via #DB15debate.