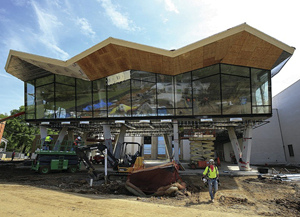 President Clinton joined AMFA’s leadership team for the New York announcement at The Pool at the Seagram Building in Manhattan.

Simultaneously in New York City and Little Rock today, the Arkansas Museum of Fine Arts (AMFA) revealed the exhibitions and site-specific commissions slated for its grand reopening on April 22, 2023. The oldest and largest cultural institution of its kind in Arkansas, AMFA has reimagined its building and 11-acre campus in downtown Little Rock. President Clinton joined AMFA’s leadership team for the New York announcement at The Pool at the Seagram Building in Manhattan.

“My predecessor as governor, Winthrop Rockefeller, was right to call the Arkansas Museum of Fine Arts ‘more than a museum’. I’m thrilled that with this transformation, visitors from around the corner and around the globe will enjoy a world-class facility in the heart of Little Rock. This project is such a great model of public/private cooperation – for small cities and big cities alike – and I’m grateful to everyone who came together to make it possible,” said President Bill Clinton.

AMFA’s new 133,000-square-foot building will house its permanent and international collection of 14,000 works of art dating to the 14thcentury.

The opening permanent collection installation will showcase some of the Museum’s most significant works – including drawings by Signac, Marin, and O'Keeffe and rare paintings by Rivera and Elaine de Kooning – and the Drawn to Paper exhibition will illustrate the depth of AMFA’s holdings of 20th century American and European works on paper. The reopened AMFA will also feature site-specific commissions by contemporary artists Anne Lindberg and Natasha Bowdoin; a special exhibition of the work of Chakaia Booker; and the Museum’s New Media Gallery featuring the animated video Tears of Chiwen by Beijing-based artist Sun Xun. Comprised of new acquisitions and loans by artists such as Elias Sime, Ryan RedCorn, LaToya Hobbs, and Oliver Lee Jackson, the banner inaugural exhibition, Together, is a celebration of art that explores our connectedness to each other and the natural world.

“With our permanent collection installation and exhibitions, our visitors will experience works that uniquely tell the story of AMFA, an institution that has brought the world of art to Arkansas for generations,” said Dr. Victoria Ramirez, AMFA’s Executive Director. “We’re very excited to partner with the dynamic artists we chose for our inaugural year’s commissions and special exhibitions – all of whom collectively represent diverse artistic voices and practices.”

Designed by Studio Gang, the world-renowned architecture and urban design practice led by MacArthur Fellow Jeanne Gang, the new AMFA revitalizes its existing structures and unites them with a “blossoming” central addition that establishes a bold new architectural identity for the museum.

The organic curves and pleated roof of the central addition establish a light-filled, connective space that intuitively guides visitors into the museum’s reimagined spaces – including the Harriet and Warren Stephens Galleries, Windgate Art School with the Robyn and John Horn Gallery, Governor Winthrop Rockefeller Lecture Hall, Terri and Chuck Erwin Collections Research Center, a performing arts theater, and a modern restaurant – that together offer multiple ways to experience and appreciate art.

Studio Gang’s design also restores the historic 1937 Art Deco façade as the building’s north entrance and creates an entrance at the south that opens directly onto an 11-acre landscape, designed by award-winning landscape architect Kate Orff of SCAPE Landscape Architecture, that extends the museum experience into MacArthur Park.

“Since its inception, the Arkansas Museum of Fine Arts has held community and arts education at its heart. But its facilities were holding the museum back from reaching its full potential,” said Jeanne Gang, Founding Partner of Studio Gang. “Our design strengthens the museum’s role as a cultural anchor for Little Rock by uniting once-disparate structures into a cohesive whole and opening the building to the surrounding city and landscape. By optimizing its functional spaces and expanding its galleries, classrooms, and social spaces, the building transforms the visitor experience into one that is intuitive, inspiring, and continuous with its setting in MacArthur Park.”

AMFA Capital Campaign Co-Chairs Harriet and Warren Stephens also announced that the capital campaign supporting the project, Reimagining the Arkansas Museum of Fine Arts, has raised more than $150 million to date – far exceeding the original $128 million goal – and now closing in on a total of $155 million.

Harriet Stephens, Building Committee Chair and Capital Campaign Co-Chair, said: “From its beginnings, this institution has always been born of, and sustained by, the passion of a dedicated community. This project was a perfect opportunity to give Little Rock and Arkansas the world-class, 21st-century, sustainable arts destination it deserved for now and for the future.”

Warren Stephens, AMFA Foundation Chair and Capital Campaign Co-Chair, added: “Anyone who said we couldn’t reach our ambitious campaign goals just doesn’t know this community and our state. Thanks to an incredible outpouring of support from so many people, we’ve now raised an amazing ($150.4) million – a testament to the philanthropic spirit of the local community – and the belief we all share in the future of Little Rock and this institution.”

The capital fundraising campaign includes a $31,245,000 contribution from the City of Little Rock, generated through a hotel tax revenue bond approved by voters.

“AMFA and my administration share the belief that equity in access to the arts is important for all,” said Little Rock Mayor Frank Scott Jr. “Our city can feel a real pride – and a sense of ownership – in an institution that connects our entire community, attracts visitors, gives downtown an economic boost, and will remain open to the public, free of charge, just as it’s always been.”

Overwhelming private support has nearly quintupled the impact of the public contribution to the project. Lead donors include Windgate Foundation, Harriet and Warren Stephens, the Winthrop Rockefeller Charitable Trust, Terri and Chuck Erwin, and the State of Arkansas.