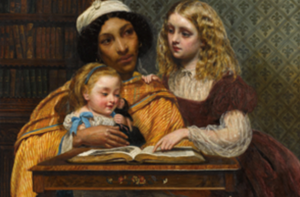 A Pre-Raphaelite painting worth £314,880 is at risk of leaving the UK unless a buyer can be found to save the work for the nation.

A Pre-Raphaelite painting worth £314,880 is at risk of leaving the UK unless a buyer can be found to save the work for the nation.

Rebecca Solomon was known for showing an awareness of inequality in her work and this painting titled A Young Teacher depicts sitter Fanny Eaton, whose mother was a former enslaved woman in Jamaica, posing as an Indian nursemaid. The piece provides a nuanced and sensitive perspective on gender and ethnicity in the 19th century.

Rebecca Solomon hails from a prominent Jewish family and went on to become a pioneering pre-Raphaelite artist. She was also active in social reform movements, including as part of a group of thirty-eight artists who petitioned the Royal Academy of Arts to open its schools to women.

Rebecca Solomon’s work shone a light on inequality and prejudice at a time when these subjects were far from mainstream. Her painting A Young Teacher has more to tell us about gender and ethnicity in the 19th century and I hope a UK buyer comes forward so we can continue to learn more about attitudes at the time.

The Minister’s decision follows the advice of the Reviewing Committee on the Export of Works of Art and Objects of Cultural Interest. The committee agreed that the painting was extremely important in the context of diversity and representation of Black and Asian figures in 19th century Britain, as well as noting the lack of professional, female Jewish artists of this period in British public collections.

Despite its seemingly undramatic character, Solomon’s painting is a bold and ambitious meditation on issues of gender, race, intimacy and education. The Young Teacher cries out for further investigation and interpretation: new research on its creator, subject-matter, production and display has the potential to enrich our understanding not only of the picture itself, but of Victorian art and culture more generally. For all these reasons, the Committee very much hopes it finds a home in the UK.

The RCEWA made its recommendation on the grounds that its departure from the UK would be a misfortune because it was of outstanding significance for the study of women artists and Jewish art in 19th century Britain, as well as to the history of art and Empire.

The decision on the export licence application for the painting will be deferred for a period ending on 1st February 2023 inclusive. At the end of the first deferral period owners will have a consideration period of 15 business days to consider any offer(s) to purchase the painting at the recommended price of £314,880. The second deferral period will commence following the signing of an Option Agreement and will last for three months.