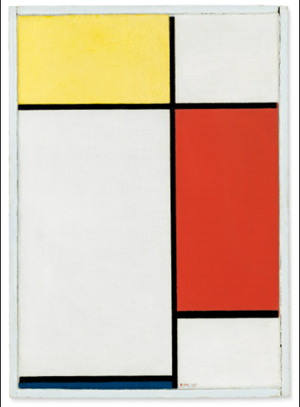 Christie’s has announced the inclusion of Piet Mondrian’s Composition: No. II, with Yellow, Red and Blue, 1927 in its upcoming, newly-introduced 20th Century Evening Sale at Christie’s New York on May 11, 2021 (estimate on request; in the region of US$25M). The painting is a rare and exceptional example of the artist’s revolutionary abstract aesthetic, made during a pivotal time in his career.

Christie’s has announced the inclusion of Piet Mondrian’s Composition: No. II, with Yellow, Red and Blue, 1927 in its upcoming, newly-introduced 20th Century Evening Sale at Christie’s New York on May 11, 2021 (estimate on request; in the region of US$25M). The painting is a rare and exceptional example of the artist’s revolutionary abstract aesthetic, made during a pivotal time in his career.

Composition: No. II, with Yellow, Red and Blue will be unveiled for viewing at Christie’s Hong Kong from April 12-14 and at Christie’s London April 20-22 before returning to New York for the full exhibition of May sales property at Rockefeller Center in May. In Hong Kong, this modern masterpiece will be exhibited alongside Claude Monet’s Waterloo Bridge, effet de brouillard, 1899-1903, (estimate in the region of US$35 million) and Pablo Picasso’s iconic portrait Femme assise près d’une fenêtre (Marie-Thérèse), 30 October 1932 (estimate in the region of US$55 million). All three masterpieces of the 20th Century will be offered in Christie’s inaugural 20/21 spring auction series in New York.

Throughout the 1920’s, Mondrian pioneered and explored Neo-Plasticism, developing and refining the principles of abstract art by employing only the fundamental elements of painting. Dating to the latter part of the decade, Composition: No. II, with Yellow, Red and Blue encapsulates the spirit of Mondrian’s “classical period” at which point he attained a peak level of purity and balance in his paintings.

Vanessa Fusco, Co-Head of the 20th Century Evening sale: “Composition: No. II, with Yellow, Red and Blue is filled with a dynamic internal energy, in which each line, each plane, each color is brought to life by its relationship to the other elements within the painting. Indeed, it is the effect achieved through their union and orchestration, that stands at the very core of Mondrian’s creative vision.”

Considered today as fundamental statements in the history of Modern Art, Mondrian’s Neo-Plastic paintings from the 1920’s were largely ignored by his contemporaries. Created in his legendary rue du Départ studio in Paris where he lived and painted until 1936—completely immersed in the world of Neo-Plasticism—Composition: No. II, with Yellow, Red and Blue was first shown, along with 17 other works, in a small exhibition organized by the Dutch painters association, Parisian Hollandsche Schildersvereeniging.

Artist and author Michel Seuphor said, “The year 1926 was important in Mondrian’s life. That year he was visited by Miss Katherine S. Dreier, who bought one of his large, lozenge-shaped canvas, which was exhibited that same year in Brooklyn, at the International Exhibition of the Société Anonyme. In the book, published on the occasion…, the courageous organizer of the exhibition wrote: ‘Holland has produced three great painters who, though a logical expression of their own country, rose above it through the vigour of their personality—the first was Rembrandt, the second was Van Gogh, and the third is Mondrian… Mondrian, who, starting from that strongly individualistic expression, has attained a clarity that has never been achieved before him.’” (M. Seuphor, Piet Mondrian, Life and Work, New York, 1955, pp. 163-164).

Mondrian’s ground-breaking Neo-Plastic paintings have been a source of inspiration for artists since they were created. Alexander Calder, recalling his first visit to Mondrian’s studio, stated: “This one visit gave me a shock that started things. Though I had often heard the word ‘modern’ before, I did not consciously know or feel the term ‘abstract.’ So now, at thirty-two, I wanted to paint and work in the abstract” (quoted in Calder: An Autobiography with Pictures, New York, 1966, p. 113). Yet another admirer and collector of Mondrian’s work was Yves Saint Laurent, who said of the artist: “Mondrian is purity, and you can’t go any further in painting. The masterpiece of the twentieth century is a Mondrian.”

The upcoming global tour of the work to Christie’s locations marks the first public exhibition of the work since 1993, when it was acquired by the present owner. Christie’s holds the world record price at auction for a painting by Mondrian, set in May 2015 for Composition No. III, with Red, Blue, Yellow, and Black, 1929 for $50.6 million. The sale of Composition: No. II, with Yellow, Red and Blue in May marks the first time since that a Neo-Plastic masterpiece by Mondrian will be offered at auction.