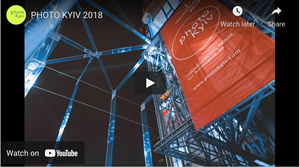 This year, Photo Kyiv international team, consisting of Ivanna Bertrand (Ukraine) Anna Savitskaya-Balan (Russia) and Carole Glauser Pidoux (Swiss) will organize an exhibition "Faces of War" in The Hague, Netherlands, against the backdrop of the International Criminal Court, where War crimes committed by Russia against Ukraine is being looked into.

Both photojournalists have created works amidst the terror of war-torn Ukraine. On encountering these images, one would find them incredibly moving, yet fascinatingly beautiful to see. Exposure in the New York Times and the Washington Post has brought the two photographers’ international recognition.

"Faces of War" is specially created by Photo Kyiv, an annual photo exhibition in Kyiv. Hoogsteder Museum Stichting & Mahoney Stichting is presenting Faces of War in the hope that the exhibition will promote empathy and support for the Ukrainian people in the tragic circumstances in which they now find themselves.