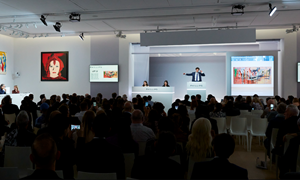 At the last 20th Century and Contemporary Evening Sale hosted by Phillip’s on May 18, 2022, $225 Million was realized. A 90% increase on the previous year.

At the last 20th Century and Contemporary Evening Sale hosted by Phillip’s on May 18, 2022, $225 Million was realized. A 90% increase on the previous year.

Jean-Paul Engelen, President, Americas and Worldwide Co-Head of 20th Century & Contemporary Art, “This was a historic evening at Phillips. Our sale total of $225 million marks a major milestone – the highest in company history. From Robert Delaunay to Anna Weyant, the auction presented the very best of the past 100 years of art, distilled into 36 lots. We saw strong international interest with equal participation from Asia and Europe, each representing over 20% of the registered bidders. The sale was led by Jean-Michel Basquiat’s Untitled from the esteemed collection of Yusaku Maezawa, which realized $85 million, a 50% increase from the painting’s last sale in 2016.”

Robert Manley, Deputy Chairman and Worldwide Co-Head of 20th Century & Contemporary Art, added, “Tonight’s result reflects strength across all sectors of the market. From a seven-minute bidding war for Alexander Calder’s 1959 mobile, to fierce demand for Shara Hughes’ 2017 canvas, a remarkable 70% of works sold above their high estimates. A particular high point of the evening was the battle for the 1961 Yves Klein, which realized nearly $20 million, doubling its last sale in 2010. Reflecting a conscious choice, 14 of the 31 artists in tonight’s sale were women, which included new world auction records for Yayoi Kusama and Robin F. Williams, and outstanding results for works by Anna Weyant and María Berrío.”