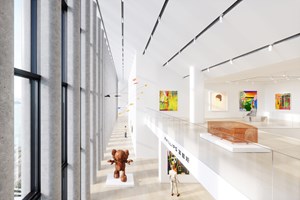 Phillips, the global auctioneers, announced today its relocation in Hong Kong in Fall 2022 to the WKCDA Tower located in the heart of the vibrant West Kowloon Cultural District (the District), one of the largest and most ambitious cultural projects in the world. Situated immediately opposite to the newly opened M+ and neighbouring the Hong Kong Palace Museum scheduled to open in mid-2022, Phillips’ spectacular new Asia headquarters will complement the iconic exhibition spaces Phillips has opened in London in Berkeley Square, and most recently in New York at 432 Park Avenue.

Reinforcing its commitment to the Asia Pacific region, and responding to global market demands, Phillips will have a permanent purpose-built exhibition space and saleroom in Hong Kong, allowing for year-round events and auctions in its own space. Its new headquarters in the WKCDA Tower features over 48,000 square feet spreading over a total of six floors, including three lower retail floors, two upper floors of purpose-built exhibition space, and one floor dedicated to the office space. A triple height space with a 14-metre-tall glass window façade overlooking the Victoria Harbour will be a key architectural feature and provide natural light for optimal viewing of artworks.

Edward Dolman, Phillips’ Executive Chairman comments on the move, “I am very excited to be able to announce this incredibly important milestone for Phillips. This long-planned investment in a new headquarters for Phillips Asia reflects and reaffirms our confidence in the region, and further cements Phillips’ important position in the market in Asia. This expansion of our presence in Hong Kong is an affirmation that Asia is a leading force in the global art ecosystem.”

Stephen Brooks, Chief Executive Officer, Phillips, says, “Phillips expanding presence in Asia is a critical component of our growth strategy with Asian participation in Phillips’ auctions becoming such a significant force. We have seen over 30 percent increase in Asian client interaction with Phillips since the start of lockdown last year. I am delighted we will have a state of the art permanent sale room presence in such an exceptional, and world class, cultural destination in West Kowloon.”

Jonathan Crockett, Chairman, Asia, Phillips says, “This exciting move and addition of permanent exhibition space will allow Phillips Asia to expand our offering as well as hold exhibitions, auctions and other events throughout the year. Being located at the heart of the West Kowloon Cultural District will allow us to work alongside M+, the Hong Kong Palace Museum and the wider District on complementary programming and events, further enhancing the area as a world-class global destination for arts and culture. It is with tremendous anticipation that we look forward to offering our clients an enhanced experience that is unrivalled in Asia and aligns with our headquarters in New York and London.”

Mrs Betty Fung Ching Suk-Yee, Chief Executive Officer of the West Kowloon Cultural District Authority, says, “Our vision is to create a vibrant new cultural quarter for Hong Kong and the world, dedicated to bringing local and international artists together for creative and inspiring collaborations and presenting the best of eastern and western cultures, from Chinese opera, Chinese arts and antiquities from Palace Museum to contemporary visual and performing arts. Both West Kowloon Cultural District and Phillips, which has a strong network and renowned expertise in auction, share a common vision for promoting arts and cultural development. We believe that Phillips’ new home in the District is poised to become a worldwide destination for collectors in Hong Kong, Asia and beyond. This momentous new chapter marks the beginning of our long-term collaboration with Philips in contributing to local, regional and international arts and cultural development.”