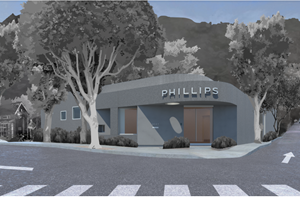 Following a record-breaking season, Phillips auction house has announced the opening of its first Los Angeles gallery space as part of the company’s continued global expansion and commitment to the West Coast region.

Following a record-breaking season, Phillips auction house has announced the opening of its first Los Angeles gallery space as part of the company’s continued global expansion and commitment to the West Coast region. Phillips Los Angeles, the new West Hollywood outpost, will be located at 9041 Nemo Street, in the heart of Los Angeles’ art and culture scene, reaffirming the importance of the West Coast in the global marketplace.

Set to open in October 2022, Phillips Los Angeles will host exhibitions devoted to traveling highlights from auctions in New York, London, Hong Kong and Geneva, as well as private selling exhibitions specifically curated for the space, panel discussions, and events. Over the past six years, Phillips has invested significantly in the area, having assembled the most experienced team of specialists in LA across the auction industry, including Blake Koh, Regional Director, Los Angeles; Rebekah Bowling, Senior Specialist, Head of 21st Century Art; and Meaghan Roddy, Head of Design, West Coast.

“The West Coast has played an instrumental role, not only in the evolution of today’s art market, but also in the trajectory of the entire post-war and contemporary art scene. Countless artists and creators have found inspiration here in California and I am thrilled to be a part of the founding Phillips Los Angeles team. We are eager to share all that Phillips is known for with the Los Angeles community,” said Blake Koh, Senior Specialist and Regional Director of Los Angeles. “From 20th Century & Contemporary Art, Editions, Design, and Photographs to Jewelry and Watches, Phillips Los Angeles will bring the very best to the vibrant collecting community here in the city, and we look forward to welcoming everyone through our doors in West Hollywood when we open in October.”

The West Coast has been an increasingly important region for collecting across art, design, jewelry, and watches. In addition to working with several important collections in the area, Phillips has seen a 30% increase in the number of buyers based in CA from Spring 2021 to 2022 alone.

Stephen Brooks, Phillips’ Chief Executive Officer, said, “We are proud to take this opportunity to expand Phillips’ global footprint with a permanent gallery space in the heart of Los Angeles, as we simultaneously open a new state-of-the-art saleroom in Hong Kong’s West Kowloon. It’s become clear — now more than ever — that the market is truly international. As we break down barriers and broaden our reach, we look forward to deepening our relationships with our community of collectors across the world.

Formation Association has been named as the architect for the Phillips Los Angeles and will work closely with Phillips to design 2,600 square feet of new gallery space.