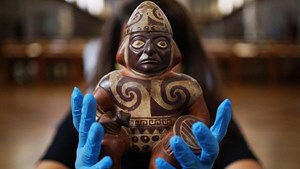 It has been announced that a landmark loan of ancient objects will travel from Peru to the British Museum for a major new exhibition on the ancient cultures of the South American country.

Over 40 remarkable objects - some dating from over 3,000 years ago - will come to the British Museum in London from nine museums across Peru. Most of them have never travelled to the UK before.

They will go on show alongside around 80 other pieces from the British Museum's collection in ‘Peru: A Journey in Time’ a special exhibition exploring the thousands of years that humans have lived in the remarkable landscapes of the Andes mountains and beyond. It is the first major exhibition the British Museum has ever staged on Peru. It coincides with the 200th anniversary of the country's independence and is supported by PROMPERU.

From the early culture of Chavin in 1200 BC, up to the fall of the Incas in AD 1532, the exhibition will chart the rise and fall of six little known and yet extraordinary societies. Visitors will discover how people thrived in one of the most challenging and geographically diverse regions in the world, adapting to landscapes ranging from arid deserts along the Pacific coast, high mountains across the Andes and tropical forests in the Amazon in the east.

Highlights among the objects coming from Peru include a stunning 2,500-year-old gold headdress and pair of ear plates which were part of an elite burial found at the site of Kuntur Wasi, Cajamarca. They are decorated with embossed motifs of human faces with feline fangs and snakes' appendages. Also making the journey to the British Museum is a striking ceremonial drum from around 100 BC - AD 650 featuring a depiction of the capture of defeated enemies in ritual combat, one of the principal scenes of the Nasca people's worldview.

The oldest object on loan will be a ceremonial vessel from the Cupisnique culture, which flourished along what is now Peru's northern Pacific coast, and is thought to date from up to 1200 BC. It is in the shape of a contorted human body, possibly representing someone born with a disease which causes symptoms such as loose joints and unusual flexibility, which was a revered ability in this culture.

Hartwig Fischer, Director of the British Museum, said: "A single step through the front doors of the British Museum is always the first step on a journey, and with this exhibition we invite visitors to travel through the history of one of the most captivating regions in the world. The scale of the generous loan of ancient objects from museums in Peru is unprecedented and a landmark opportunity to see them here in the UK. The fascinating range of material on display collectively challenges perceptions of how the world can be viewed and understood. We are grateful for the support of PROMPERU for making it all possible."