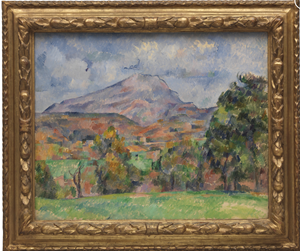 Christie’s and the estate of philanthropist Paul G. Allen, co-founder of Microsoft, are proud to announce an historic auction of more than 150 masterpieces spanning 500 years of art history. Visionary: The Paul G. Allen Collection reflects the depth and range of Mr. Allen’s collecting, which is unlike anything that has come before, connecting a visionary innovator and the ground-breaking artists he collected. Valued in excess of $1 billion, the sale of the Collection will be the largest and most exceptional art auction in history when it is sold at Christie’s Rockefeller Center in November 2022. All sale proceeds will be dedicated to philanthropy, pursuant to Mr. Allen’s wishes.

Jody Allen, Executor of the Paul G. Allen Estate, commented, “To Paul, art was both analytical and emotional. He believed that art expressed a unique view of reality – combining the artist’s inner state and inner eye – in a way that can inspire us all. His collection reflects the diversity of his interests, with their own mystique and beauty. These works mean so much to so many, and I know that Christie’s will ensure their respectful dispersal to generate tremendous value for philanthropic pursuits in accordance with Paul’s wishes.”

Guillaume Cerutti, Christie’s Chief Executive Officer, commented, “The inspirational figure of Paul Allen, the extraordinary quality and diversity of works, and the dedication of all proceeds to philanthropy, create a unique combination that will make the sale of the Paul G. Allen Collection an event of unprecedented magnitude. Paul’s life was guided by his desire to make this world a better place. We believe that presenting his collection at auction and giving the opportunity to wider audiences to discover it will be a fitting tribute to celebrate Paul Allen’s vision and legacy. We are honoured and privileged and extend our gratitude to the Paul G. Allen Estate for having chosen Christie’s as its partner for this project.”

From co-founding Microsoft in 1975 to starting his first charitable foundation in 1986, from creating the acclaimed Museum of Pop Culture (MoPOP) in 2000 to launching the Allen Institute in 2003 with its game-changing scientific breakthroughs across brain science, cell science, and immunology, Paul G. Allen lived a life motivated by a love of ideas and making the world a better place.

An avid art collector for decades, Allen began publicly sharing pieces from his collection in the late 1990s through dozens of often anonymous loans to museums around the world. In addition, he mounted exhibitions that shared highlights of his collection with the public, including the renowned Seeing Nature exhibit in 2016 that toured nationally. It showcased 39 iconic landscape paintings that demonstrated the natural world and highlighted key moments in the development of the landscape genre.

“You have to be doing it because you just love the works… and you know that all these works are going to outlast you,” Allen reflected in an interview for Seeing Nature. “You’re only a temporary custodian of them.”

In 2010, Allen was an early signer of the Giving Pledge, a commitment to contribute the majority of one’s wealth to charitable causes, and in 2015, he was awarded the Carnegie Medal of Philanthropy for dedicating his private wealth to public good. He remarked “…one of my core goals is to accelerate discovery and provide some of the world’s brightest minds with the resources to solve some of the world’s thorniest challenges.”

His philanthropic contributions of more than $2.65 billion during his lifetime deepened our understanding of bioscience, shared art, music, and film with the world, tackled epidemics, helped save endangered species, explored the ocean floor, and invested in more vibrant and resilient communities. Many called Allen a polymath, whose knowledge and skills spanned a wide range of disciplines.

Allen passed away in October 2018, but the breadth and depth of his generosity, and his desire to continue improving the lives of people around the world even after his death, will create impact for generations to come.