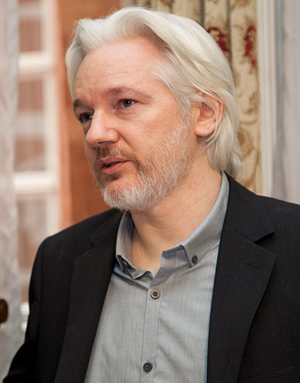 Assange is battling extradition from Britain to the United States where the authorities want him to face trial on 18 criminal charges including breaking a spying law, after WikiLeaks began to publish thousands of secret classified files and diplomatic cables in 2010.

Last month, Assange, who remains in a London prison, was given the chance to challenge approval of his extradition at Britain's highest court. The Supreme Court will now decide whether or not to hear his case.

Assange collaborated with a crypto artist known as Pak to sell a collection of NFTs (non-fungible tokens) called Censored in an online auction from February 7-9 to help raise funds to support his case.

NFTs are a kind of crypto asset that uses blockchain to record the ownership status of digital files such as images, videos and even items within online games.

The centrepiece of the auction is an NFT artwork, Clock, that displays the number of days Assange has been imprisoned in white text on a black background. It updates each day.

The bid was placed by Assange supporters who formed a group called AssangeDAO to bid collectively on the NFT.

A Decentralised Autonomous Organisation (DAO) is a sort of online community which allows members to pool their money and use blockchain-based tokens to vote on decisions about how it is run.

The AssangeDAO raised 17,422 of the cryptocurrency ether - around $54.6 million - since Feb. 2, according to the crowdfunding website Juicebox. More than 10,000 people contributed to the fundraise.

"This is tens of thousands of people coming together to show real strength - the Power of the People," AssangeDAO community lead Joshua Bate said in a Discord post announcing the bid. "In less than one week, we have shown that decentralised and distributed peoples can band together to fight injustice."

Proceeds from the sale of Clock will go to support Assange's legal defence, the group said.

The auction closes at 1400 GMT. If the AssangeDAO loses the auction, people who have paid in to the DAO will have the option to withdraw their funds, the AssangeDAO website said.

The Censored auction also allows supporters to create their own NFTs, choosing an amount to pay and typing in a short message which gets turned into an image showing the words struck through, as though censored.

Supporters raised more than 587 ether ($1.8 million) in this way, creating 27,875 "censored" messages, with the proceeds going to pro-freedom organisations chosen by Assange and Pak.