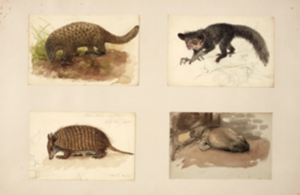 A set of 120 drawings of animals worth £119,700 is at risk of leaving the UK unless a buyer can be found to save the collection for the nation.

A set of 120 drawings of animals worth £119,700 is at risk of leaving the UK unless a buyer can be found to save the collection for the nation.

Joseph Wolf was a 19th century artist who specialised in natural history illustrations. He produced works for the British Museum and the Zoological Society of London and was well known for depicting animals in accurate, lifelike postures.

The norm of painting an animal in its natural habitat was established by Wolf and this set of 120 original drawings of animals demonstrates his outstanding skills and artistry for depiction of animal behaviour.

Arts Minister Lord Parkinson said: Joseph Wolf’s magnificent drawings of animals in their natural habitats are a joy to behold as well as a fascinating insight into natural history illustration in the 19th century. I sincerely hope a buyer comes forward to save these for the nation.

The Minister’s decision follows the advice of the Reviewing Committee on the Export of Works of Art and Objects of Cultural Interest. The committee noted that the collection of drawings held enormous research potential, particularly as they sit at the intersection of visual arts and intellectual inquiry.

Committee member Christopher Baker said: Joseph Wolf (1820–1899) played a key role in the development of natural history illustration in Britain by animating and contextualising his subjects and indicating the habitats and behaviours of animals – which was a quite different approach to earlier, more static representations. His fascinating and accomplished work was highly regarded by Victorian naturalists, explorers and artists, and appeared in scientific journals, luxury books with colour plates and more popular, accessible publications. This substantial group of drawings is of particular interest as it allows an intimate view of his working processes and observational skills and has great potential for research on his pioneering practice and its legacy. Securing the drawings for a public U.K. collection would be highly desirable.

The RCEWA made its recommendation on the grounds that the collection was of outstanding significance to the study of natural history art and illustration.

The decision on the export licence application for the painting will be deferred for a period ending on 6 February 2023 inclusive. At the end of the first deferral period owners will have a consideration period of 15 business days to consider any offer(s) to purchase the painting at the recommended price of £119,700 (plus £4,940 VAT). The second deferral period will commence following the signing of an Option Agreement and will last for three months.