Opening in Lisbon: New Museum of Art, Architecture and Technology 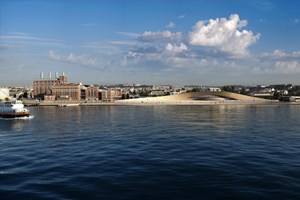 Designed by British architect Amanda Levete, MAAT - Museum of Art, Architecture and Technology will open on the Tagus River in Belém, Lisbon, on 5 October 2016 and will explore contemporary culture through visual arts, new media, architecture, technology and science. With its unique heritage, a growing collection of Portuguese art and an innovative exhibition programme, MAAT will be a cultural space of discovery, critical thinking and international dialogue.

This October, EDP Foundation will officially open MAAT Museum on the Tagus River in Belém, Lisbon. Designed by British architect Amanda Levete, this initiative is at the heart of an exciting urban revitalisation along one of Lisbon’s most historical waterfront neighbourhoods.

Led by Director Pedro Gadanho, MAAT, the Museum of Art, Architecture and Technology, will explore contemporary culture through visual arts, new media, architecture, technology and science. With its unique heritage, a growing collection of Portuguese art and an innovative exhibition programme, MAAT will be a cultural space of discovery, critical thinking and international dialogue.

“MAAT not only supports Portuguese artists,” notes Gadanho, “but also local curators who are important figures in the cultural development of a place, as producers of content and relationships.”

MAAT will be the focal point on the site of the EDP Foundation Campus. Housed within two buildings, the new kunsthall structure, designed by AL_A, the internationally renowned architecture practice headed by Amanda Levete, and the newly renovated Tejo Power Station, MAAT will present a permanent science and electricity display, as well as a wide-ranging programme of temporary exhibitions.

MAAT Museum officially opens on 5 October 2016 with a presentation in the newly inaugurated Oval Gallery of its first commission: Dominique Gonzalez- Foerster, Pynchon Park. Other exhibitions opening in October will include The World of Charles and Ray Eames in partnership with Barbican Centre in London and The Form of Form, one of the main exhibitions featured at the 4th Lisbon Architecture Triennale.

In the lead up to the official opening in October, MAAT has featured a programme of innovative exhibitions and events in the newly renovated 20th-century Central Tejo power station, a thermoelectric power plant and the site of the former Museu da Eletricidade. Its four new galleries also inaugurated their first exhibitions in June 2016.