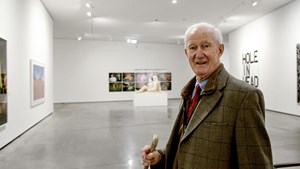 Astrup Fearnley Museum of Modern Art in Oslo has announced the passing away of Hans Rasmus Astrup on April 23, 2021. He was 82.

Astrup Fearnley Museum of Modern Art in Oslo has announced the passing away of Hans Rasmus Astrup on April 23, 2021. He was 82.  With his unique commitment to contemporary art, a desire to share his enthusiasm with others, and a clear philanthropic mission, Astrup has had a deep impact on the field of art both in Norway and internationally.

Hans Rasmus Astrup (b. 1939) held a Cand. Jur. degree in law from the University of Oslo. In 1972 he took over as the fourth generation managing director of the family’s shipping firm, Fearnley & Egers Befragtningsforretning (later Fearnleys A/S), which was founded in 1896.

Astrup came from a family with a long tradition of collecting art and began his own collecting while living in New York in the 1960s. He showed an avid interest in the most innovative artistic voices in international contemporary art from early on, and in the late 1980s he initiated planning for a museum focused on the significant collection that he had built over the years. On 9 October 1993 the Astrup Fearnley Museum of Modern Art opened its doors for the first time at Dronningens gate 4, in the Kvadraturen district of Oslo. Astrup’s reputation as a bold and visionary collector was further strengthened by his acquisitions of such major works as Anselm Kiefer’s monumental bookshelf in lead, The High Priestess / Zweistromland (1989), and Damien Hirst’s cows in formaldehyde, Mother and Child (Divided) (1993). Both works were given pride of place in 2012 when the museum moved into a new building on Tjuvholmen, designed by the architect Renzo Piano. For the museum this was the beginning of a new era, in which Astrup could do even more to shape a collection and an exhibition programme that was thoroughly accessible to the public.

In 2013 Astrup set up the non-profit foundation Stiftelsen Hans Rasmus Astrup, the sole purpose of which is to guarantee the future operation of the museum and the further development of the collection. He subsequently donated all his capital and assets to this foundation.

Through his work as an art collector, Astrup emerged as a profoundly significant figure, not just for the many individual artists whose careers he followed with unwavering interest, but also for the field of culture in Norway more broadly. So much more than a home for a private collection, the museum that Astrup created is an institution that now plays a central role in the development of contemporary art and in fostering knowledge about the field in Norway. In addition to presenting Norwegian artists on a grand scale, the Astrup Fearnley Museum has given Norwegian audiences many first opportunities to encounter ambitious and evocative art projects from around the world. In 1998 Astrup was awarded the Order of St. Olav for his contribution to the field of art in Norway.

Astrup was a courageous visionary with a sharp eye, and he also possessed warmth, generosity of spirit, and a keen sense of humour. While proud of his collection, Astrup preferred to stay in the background, out of the public eye. For him it was always the art and the artists who deserved the limelight. His relationship with art was characterised by commitment, curiosity, and passion. Art provided him with inspiration and a sense of purpose. In his own words: “It is important that art is not locked away. It must be seen and experienced. We have to learn from it.”

Hans Rasmus will be deeply missed. The museum pledges to carry on his legacy as they continue his life´s work at the Astrup Fearnley Museum.