Nicolas Poussin £19 Million Painting at Risk of Leaving the UK 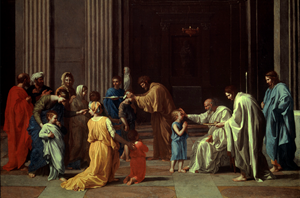 Confirmation, a painting by Nicolas Poussin dating to c. 1637-40, is at risk of leaving the UK unless a buyer can be found.

Confirmation, a painting by Nicolas Poussin dating to c. 1637-40, is at risk of leaving the UK unless a buyer can be found. Worth £19 million, confirmation is part of Poussin’s series titled The Seven Sacraments which is widely regarded as the artist’s most important commission. The series marked a turning point in Poussin’s career at the birth of the French classical tradition and at one point had its departure from Rome blocked by the Pope.

Confirmation is arguably the most significant of Poussin’s paintings from this series and is notable for its sophisticated composition woven together by glance and gesture. The painting has been in Britain for almost 240 years hanging, on several occasions, on the walls of some of the UK’s most prestigious museums, including Dulwich Picture Gallery and the Fitzwilliam Museum.

Arts Minister Lord Parkinson of Whitley Bay said: The unprecedented Seven Sacraments series is an example of Nicolas Poussin’s extraordinary inventiveness and ‘Confirmation’ stands out as the most sophisticated work in the commission.

The painting has had a profound impact on British art over the last 240 years and I sincerely hope a buyer comes forward to save it for the nation.

The minister’s decision follows the advice of the Reviewing Committee on the Export of Works of Art and Objects of Cultural Interest. The committee agreed that this is an extraordinary painting with a fascinating British history and that its importance could not be overstated. Poussin was a seminal European artist and Confirmation epitomises his technique of visual expression, intense emotion and harmony of design based on abstract form. In addition, the committee noted that the profound story in the painting is carefully articulated in a masterful way, making this painting the most interesting and beautiful of The Seven Sacraments series.

Committee Member Christopher Baker said: Nicolas Poussin’s cycle of paintings each depicting one of the Seven Sacraments of the Church was revolutionary: no artist had treated the theme in this way before. He transports you to the early years of Christianity and depicts solemn rites with a profound knowledge of archaeology and a supreme artistic sensitivity. ‘Confirmation’ is arguably the most accomplished in the sequence: it shows children quietly affirming their faith before a priest, watched by their families, with every gesture and glance carefully calibrated. Such a moving painting would represent a powerful addition to the artist’s works in U.K. collections.

Poussin’s Sacraments, which have been in Britain since the 1780s, were painted for the important Roman polymath and collector Cassiano dal Pozzo and their restrained classicism had a profound impact on many later artists. This fascinating context adds further weight to the desirability of Confirmation becoming an inspired acquisition. Every effort should be made to support this endeavour.

The committee made its recommendation on the grounds that the departure of the painting from the UK would be a misfortune owing to its outstanding significance to the study of Nicolas Poussin’s work and its influence on British art and culture.

The decision on the export licence application for the painting will be deferred for a period ending on 9 January 2023 inclusive. At the end of the first deferral period owners will have a consideration period of 15 Business Days to consider any offer(s) to purchase the painting at the recommended price of £19,000,000. The second deferral period will commence following the signing of an Option Agreement and will last for six months. Offers from public bodies for less than the recommended price through the private treaty sale arrangements, where appropriate, may also be considered by the Minister. Such purchases frequently offer substantial financial benefit to a public institution wishing to acquire the item.