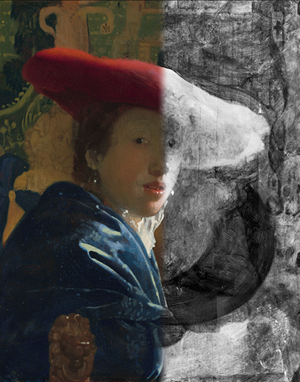 The National Gallery of Art shared groundbreaking new findings about Johannes Vermeer (1632–1675) to be explored in the exhibition Vermeer’s Secrets, opening on October 8.

The National Gallery of Art shared groundbreaking new findings about Johannes Vermeer (1632–1675) to be explored in the exhibition Vermeer’s Secrets, opening on October 8. These findings led an interdisciplinary team of curators, conservators, and scientists to determine that the painting Girl with a Flute was made by an associate of Vermeer—not by the Dutch artist himself, as was previously believed.

The idea that Vermeer worked with studio associates challenges the long-held belief that he was a lone genius and, instead, posits him as an instructor or mentor to the next generation of artists. In part because Vermeer’s oeuvre contains only about 35 accepted paintings, scholars have generally considered it unlikely that he had students or assistants.

With no surviving documents to provide evidence of a workshop—no records of pupils registered by the Delft painters’ guild, no mention of assistants in the notes of visitors to Vermeer’s studio—it was believed that he must have worked alone. Until now.

“The existence of other artists working with Johannes Vermeer is perhaps one of the most significant new findings about the artist to be discovered in decades. It fundamentally changes our understanding of Vermeer,” said Kaywin Feldman, director of the National Gallery of Art. “I am incredibly proud of the interdisciplinary team of National Gallery staff who worked together to study these paintings, building on decades of research and using advanced scientific technology to uncover exciting discoveries that add new insight to what we know about the enigmatic artist.”

Research also led curators to determine that Vermeer’s Girl with the Red Hat was made at a turning point in the artist’s career. The painting shows Vermeer experimenting with new techniques—vivid colors, a bolder manner of applying the paint—that presage paintings produced in the final phase of his career. As a result, they believe the painting should be dated slightly later, to circa 1669 (the work was previously dated to circa 1666/1667).

Many of the findings expand our understanding of the earliest stages of Vermeer’s painting process. One of the most exciting discoveries, made by comparing the results of different scientific imaging techniques with microscopic analysis, was the realization that Vermeer began his paintings with broad strokes in a quickly applied underpaint that established a robust foundation for his characteristically smooth and refined surface paint.

Building on a half-century of previous technical study on Vermeer’s works at the National Gallery, researchers took advantage of the museum’s COVID-related closures in 2020/2021 to examine the museum’s four paintings by and attributed to Johannes Vermeer, which are rarely taken off view, especially at the same time. On view through January 8, 2023, Vermeer’s Secrets offers audiences a behind-the-scenes look at how National Gallery curators, conservators, and scientists investigated the museum’s four treasured paintings—as well as two 20th-century forgeries—to understand “what makes a Vermeer a Vermeer.” The exhibition outlines some of the most exciting findings along with scientific images of the paintings, and even one of the specialized technical instruments used to conduct the imaging.

Following decades of study, the National Gallery team concluded that Girl with a Flute (c. 1669/1675) is not, in fact, by Johannes Vermeer. Instead, they believe, the painting was made by an associate of Vermeer—someone who understood the Dutch artist’s process and materials but was unable to completely master them. Exactly who that person might be remains to be determined, but the implication that Vermeer worked closely with other artists is significant, as it revises the long-held belief that Vermeer worked in isolation. The mystery artist could have been a pupil or apprentice, an amateur who paid Vermeer for lessons, a freelance painter hired on a project-by-project basis, or even a member of Vermeer’s family.

The team compared Girl with a Flute to Vermeer’s Girl with the Red Hat. Both are small paintings previously hypothesized to be a pair due to similarities in subject, size, and use of a wood panel support—unusual for Vermeer. However, the paint application in Girl with a Flute is very different from Girl with the Red Hat. Not only does it lack the precision for which Vermeer is known, but the artist seems not to have had Vermeer’s control: the brushwork is awkward, and the pigments used in the final paint are coarsely ground, giving the surface an almost granular character. Vermeer ground his pigments coarsely for his underpaint and more finely for the final paint layers to achieve their delicate surfaces. The artist of Girl with a Flute inexplicably reversed this order. Despite the different handling, microscopic pigment analysis showed that both compositions used the same pigments, even including green earth shadows of the face—an idiosyncratic feature characteristic of Vermeer’s paintings. Taken together, these findings clearly show that, although Vermeer did not paint Girl with a Flute, this artist was intimately familiar with Vermeer’s unique working methods.

A combination of microscopic analysis and advanced imaging techniques provides a greater understanding of exactly how Vermeer built up his paintings. Prior microscopic examination showed that the artist began with a monochrome painted sketch. Imaging spectroscopy and microscopic examination revealed a quickly applied bold underpaint to plot out forms, colors, and patterns of illumination within the composition. In Woman Holding a Balance, a false-color infrared reflectance image shows freely brushed highlights on the back wall, now hidden by the smoothly brushed final paint. X-ray fluorescence (XRF) imaging spectroscopy and microscopic paint analysis showed that Vermeer added a copper-containing material to hasten the drying of black underpaint. The XRF chemical element map for copper reveals Vermeer’s broad brushstrokes at this underpaint stage, a dramatic difference from his handling in the final paint.

By contrast, microscopic examination of the final paint layer shows that Vermeer used comparatively fluid paints to create his signature smooth surfaces. Together, the microscopic analysis of paint samples and the pigment maps obtained from imaging spectroscopy show how he combined pigments to create his remarkable surface effects. In A Lady Writing, Vermeer used as many as four different yellow pigments in the woman’s jacket sleeve alone.

Girl with the Red Hat

The new research led the team to recognize Girl with the Red Hat as a pivotal work that points to Vermeer’s late style. Marjorie E. Wieseman, curator and head of the department of northern European paintings, Alexandra Libby, associate curator in the department of northern European paintings, E. Melanie Gifford, retired research conservator of painting technology, and Dina Anchin, associate paintings conservator, determined that Girl with the Red Hat represents a turning point in Vermeer’s career. They point to this work as the artist’s experiment: the moment when he began to paint his final image with a schematic rendering of forms and exaggerated contrasts of dark and light—features he had previously limited to the underpaint, but that came to characterize his late style.

The National Gallery’s senior imaging scientist, John K. Delaney, imaging scientist Kathryn A. Dooley, and retired conservation scientist Lisha Deming Glinsman, were also able to create clearer images of the portrait of a man underneath Girl with the Red Hat, first discovered in an x-ray taken in the early 1970s. A better understanding of how the man was painted and some of the pigments used was obtained with reflectance and x-ray fluorescence imaging spectroscopies. Specifically, using x-ray fluorescence imaging spectroscopy, scientists mapped the use of pigments containing the chemical element lead in the composition. By processing the image to minimize materials present in the visible surface layer, they produced an image that clearly reveals details of the man’s broad-brimmed hat, long hair, white collar, and billowy cloak.

Marjorie E. Wieseman, curator and head of the department of northern European paintings

The exhibition is organized by the National Gallery of Art.

Vermeer’s Secrets, curated by Marjorie E. Wieseman and Alexandra Libby, offers visitors an inside look at how the National Gallery’s curators, conservators, and scientists work together to understand artists’ techniques, materials, and processes. In this instance, an intensive study of four paintings by and attributed to Johannes Vermeer yielded surprising information, which will be shared for the first time in the exhibition. The exhibition also includes two 20th-century forgeries, The Lacemaker (c. 1925) and The Smiling Girl (c. 1925), which were attributed to Vermeer when they first entered the museum’s collection in 1937 as part of Andrew Mellon’s original bequest, but were later determined not to be by the artist.

The juxtaposition of these two 20th-century works and the 17th-century Girl with a Flute with paintings firmly attributed to the Dutch artist—Woman Holding a Balance (c. 1664), A Lady Writing (c. 1665), and Girl with the Red Hat (c. 1669)—will show how curators draw on research from a range of disciplines to evaluate works of art, determine attributions, and understand the qualities that make a Vermeer a Vermeer.

The exhibition invites visitors to take a closer look at Vermeer’s paintings through vivid technical images made using innovative technologies pioneered by two leaders in the field of scientific imaging—the National Gallery’s John K. Delaney and Kathryn A. Dooley. Using hyperspectral reflectance imaging techniques first developed to map minerals for remote sensing of Earth and, subsequently, the moon and Mars, as well as x-ray fluorescence imaging spectroscopy, Delaney and Dooley were able to identify and map pigments—and also to reveal what lies beneath the surfaces of these paintings, including images of brushstrokes in the underpaint stage, some of which are shown in the exhibition.

Vermeer’s Secrets pairs those images with microsample analyses and x-ray fluorescence spot analyses by Melanie Gifford and Lisha Glinsman, which allowed the two to study the stages in Vermeer’s working methods. The exhibition shows how the seven-person team of National Gallery curators, conservators, and scientists drew on these findings to expand, or in some cases alter, our understanding of Vermeer and his working process.

Celebrate the exhibition Vermeer’s Secrets with music from Johannes Vermeer’s lifetime, performed by the early music ensemble Sonnambula. In A Portrait in Music: Sounding the Dutch Baroque, Sonnambula explores the exceptional music of the Low Countries during the 17th century. Taking Dutch and Flemish paintings as inspiration, the ensemble presents five sonic portraits of musical life.