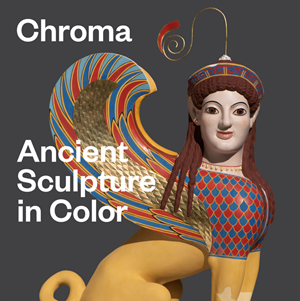 Opening at The Metropolitan Museum of Art on July 5, 2022, Chroma: Ancient Sculpture in Color reveals the colorful backstory of polychromy—meaning “many colors” in Greek—and presents new discoveries of surviving ancient color on artworks in The Met’s world-class collection.

Ancient Greek and Roman sculpture was once colorful, vibrantly painted, and richly adorned with detailed ornamentation. Opening at The Metropolitan Museum of Art on July 5, 2022, Chroma: Ancient Sculpture in Color reveals the colorful backstory of polychromy—meaning “many colors” in Greek—and presents new discoveries of surviving ancient color on artworks in The Met’s world-class collection. Exploring the artistic practices and materials used in ancient polychromy, the exhibition highlights cutting-edge scientific methods used to identify ancient color and examines how color helped convey meaning in antiquity, and how ancient polychromy has been viewed and understood in later periods.

Max Hollein, Marina Kellen French Director of The Met, said, “This innovative exhibition will activate The Met’s displays of ancient Greek and Roman art like never before by displaying colorful reconstructions of ancient sculptures throughout the galleries. It is truly an exhibition that brings history to life through rigorous research and scientific investigation, and presents new information about works that have long been in The Met collection.”

The exhibition features a series of reconstructions of ancient sculptures in color by Prof. Dr. V. Brinkmann, Head of the Department of Antiquity at the Liebieghaus Sculpture Collection, and Dr. U. Koch-Brinkmann, and introduces a new reconstruction of The Met’s Archaic-period Sphinx finial, created by The Liebieghaus team in collaboration with The Met. Presented alongside original Greek and Roman works representing similar subjects, the reconstructions are the result of a wide array of analytical investigations, including 3D imaging, and art historical research. Polychromy is a significant area of study for The Met, and the Museum has a long history of investigating, preserving, and presenting manifestations of original color on ancient statuary.

Chroma emphasizes the extensive presence and role of polychromy in ancient Mediterranean sculpture, both broadly and across media, geographies, and time periods, from Cycladic idols of the third millennium B.C. to Imperial Roman portraiture of the second century, as witnessed throughout the Museum’s collection and illustrated with 40 artworks in the permanent galleries on the first floor of the Museum. Fourteen reconstructions of Greek and Roman sculpture by Dr. Brinkmann and his team highlight advanced scientific techniques used to identify original surface treatments. These full-size physical reconstructions will be juxtaposed with comparable original works of art throughout The Met’s Greek and Roman Art Galleries, provoking visitors to rethink how the Greek and Roman sculptures originally looked in antiquity.

The Greek and Roman special exhibition gallery on the mezzanine level (Gallery 172) functions as a hub for Chroma where the exhibition themes are addressed in more depth and three additional reconstructions by The Brinkmann team are brought together with 22 works of art from The Met’s collection. The works include an early watercolor reconstruction of polychromy on Greek architectural sculpture from the Athenian Acropolis; ancient Greek terracotta vases with scenes portraying polychrome sculpture and artisans painting sculpture; and works of art from ancient Egypt to the Italian Renaissance and 19th-century America, which expand the cultural and chronological purview of the exhibition and underscore the artistic and historic significance of Greek and Roman polychromy as perceived and expressed beyond antiquity.

The new reconstruction of The Met’s Archaic-period Sphinx finial—which once crowned a grave stele in the Museum’s collection—was created specifically for the exhibition by Dr. Brinkmann and his team in collaboration with The Met’s Departments of Greek and Roman Art, Objects Conservation, Scientific Research, and Imaging. 3D digital renditions of both the original work and the reconstruction were also produced and will be used to experience the sphinx’s polychromy through Augmented Reality.

The Augmented Reality (AR) experience, Chroma AR, will allow smartphone users to virtually recreate the sphinx, seeing it as a full-color reconstruction as well as how it exists at The Met. A range of additional features, including an interactive three-dimensional rendering and a social media-like “face filter” mode, let visitors playfully explore how The Met and its collaborators use science, technology, and art history to determine the original appearance of these ancient sculptures.

Chroma AR was created in partnership with Bluecadet, an experience design firm. It launched on July 5, 2022 and will be available for the year-long duration of the exhibition.

In conjunction with the exhibition, a two-day symposium will be held at The Met in March 2023, assembling an international group of scholars and including Met curators, conservators, and scientists, to discuss a wide range of subjects related to the polychromy of ancient sculpture. Proceedings of the symposium will be published by The Met.