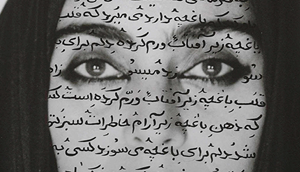 On Saturday, 29 October 2022, an intervention by Iranian artist and filmmaker Shirin Neshat on the façade of the Neue Nationalgalerie drew attention to the current protests in Iran calling for democracy and women’s rights.

On Saturday, 29 October 2022, an intervention by Iranian artist and filmmaker Shirin Neshat on the façade of the Neue Nationalgalerie drew attention to the current protests in Iran calling for democracy and women’s rights.

The banner in front of the building’s main entrance shows the self-portrait Unveiling (1993) from Neshat’s series Women of Allah (1993-97) with text excerpts by famous Iranian poet Forough Farrokhzad and now augmented with the slogan from the ongoing protests – “Woman Life Freedom” – in Farsi and English.

The monumental banner extends from the roof of the Neue Nationalgalerie down to the forecourt. Shirin Neshat (b. Qazvin, Iran, 1957) lives and works in New York.

In the midst of overlapping crises, the question arises as to the present role of a museum. In recent months, the Neue Nationalgalerie has faced up to the challenges of the times, having also been a place of collective support at the beginning of the Ukraine war. Now this intervention by Iranian artist Shirin Neshat focuses on the anti-government protests in Iran and calls for sympathy with the people demonstrating at risk to their lives for democracy and human rights. - Klaus Biesenbach, director of the Neue Nationalgalerie.