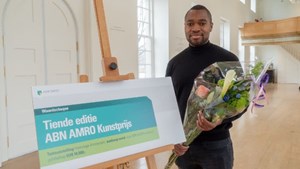 Neo Matloga has been announced as the winner of the tenth edition of the ABN AMRO Art Award. The prize includes an exhibition of his work later this year at Hermitage Amsterdam.

Neo Matloga has been announced as the winner of the tenth edition of the ABN AMRO Art Award. The prize includes an exhibition of his work later this year at Hermitage Amsterdam.

With the choice of South African artist, Matloga who, within an appealing and idiosyncratic signature style, subtly links household scenes from his home country with the difficult socio-political background against which they take place. Using ink, charcoal, and photographs, Matloga creates 'collage paintings' that provide a glimpse of the day-to-day household cosiness of his youth. Upbeat stories full of affection and a sense of security, inhabited only by people of colour.

The jury was impressed by the way in which Matloga, places a strong emphasis on relationships among people, taps into deeper social and political levels. As such, his work can be regarded as an invitation to look at a Black community.

Neo Matloga (Mamaila, South Africa, 1993) lives and works in Mamaila and Amsterdam. He studied visual arts at the university of Johannesburg and completed a two-year residency programme at De Atelier in Amsterdam from 2016 to 2018. In 2018, Matloga won the Koninklijke Prijs voor Schilderkunst. In 2019, Matloga was also nominated for the Volkskrant Beeldende Kunst Prijs. He held solo exhibitions at the Fries Museum in Leeuwarden (2019) and at Stevenson Johannesburg (2020). His work was part of group exhibitions including those of CBK Zuidoost, Amsterdam (2020), Zeitz MOCAA, Cape Town (2019), Foundation AVL Mundo, Rotterdam (2019), Kunsthal KAdE, Amersfoort (2018) and South African Constitutional Court, Johannesburg (2016).

In addition to the monetary prize of €10,000 ($12,000), Matloga will also have an exhibition at Hermitage Amsterdam, with a special publication, designed by Irma Boom, to mark the event. Work by the winning artist is also purchased for the ABN AMRO Art Collection.