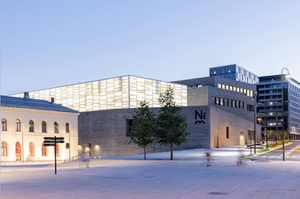 The new National Museum of Norway provides a purpose-built space for the country’s most extensive collection of art, architecture and design becoming the largest museum in the Nordic countries.

The new National Museum of Norway provides a purpose-built space for the country’s most extensive collection of art, architecture and design becoming the largest museum in the Nordic countries. More than 6,500 works, from the antiquity to the museum’s most recent contemporary acquisitions, will be on display in a collection that spans two floors and 86 rooms. The building includes a spectacular space for temporary exhibitions - the Light Hall situated on the roof - as well as a large open-air roof terrace, cafés, a shop, and the largest art library in the Nordic region. Situated on Oslo’s harbour close to the promenade, the museum offers spectacular views of the city.

– With this new building, Norway now has a modern museum with classic qualities, a new home for Norway’s largest collection of art, architecture and design. It enables us to show more of the collection than ever before, with spaces for temporary exhibitions of entirely new formats on an international scale. It is a building that will be filled with events and activities, says Director Karin Hindsbo.

The museum is designed by architect Klaus Schuwerk, Kleihues + Schuwerk Architects, and built by Norway’s government building commissioner Statsbygg. Designed with the perspective of housing artworks for centuries, the museum is built with clean and robust materials that will age with dignity, such as oak, bronze and marble. The entire facade is covered with Norwegian slate. As a FutureBuilt pilot project, the new museum is designed to reduce greenhouse gas emissions by at least 50% compared to current building standards.

Once open to the public on 11 June, the museum will host workshops where visitors can try their hand at various forms of artistic expression and have a vibrant programme of public debates, artist talks, concerts and screenings.

– Museums are places that invite us to think critically about the power of images, but they are also places of pause and reflection. Our vision is to make art accessible to each and every person, and to reflect our times and the society in which we live. If we succeed in doing this, we believe that the museum could be the most important meeting place in society, continues Director Karin Hindsbo. 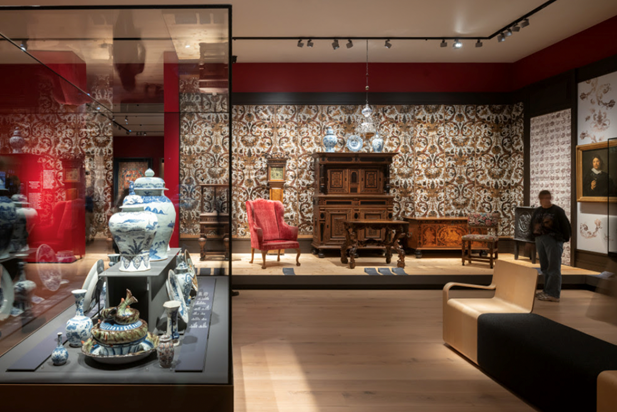 Chronologically arranged, the presentation shows in broad outline the history of the visual arts, design and crafts in Norway, together with major international works from the collection. Throughout the displays connections are established between the different areas of the collection, both within historical periods and across history. Objects on display include imperial Roman busts, the nearly one-thousand-year-old Baldishol Tapestry, porcelain from imperial China, Royal costumes and contemporary fashion, interiors and graphic design, and a collection of unique 18th century’s Norwegian glass goblets.

The galleries devoted to visual art include Dutch and Flemish landscape paintings and still lifes from the 17th century, the landscape paintings of Johan Christian Dahl, and central works by Harriet Backer, Harald Sohlberg, and Kitty Kielland. One of the main attractions is the museum’s iconic collection of works by Edvard Munch, including “The Scream”. Other notable works in the collection include paintings by Pablo Picasso and an array of other influential 20th century artists, such as Henri Matisse and Anna-Eva Bergman. There is also a room dedicated to the architect Sverre Fehn and permanent installations by Per Inge Bjørlo and Ilya Kabakov.

I Call It Art

‘I Call It Art’ is the inaugural exhibition in the Light Hall – the large room for temporary exhibitions located atop the new National Museum. Filling the Light Hall in its entirety with works that use widely different formats, materials and art forms, the exhibition presents works by 147 artists and artist groups who work in Norway today. The search for new art saw the National Museum’s curators scour the country from end to end accessing how artists work in Norway today. In addition, the museum has received contributions by over 1,000 artists through an open submissions process. At the time of selection none of the 147 artists participating in the exhibition formed part of National Museum’s collection.. With works that address themes such as identity, belonging, nationality and democracy, ‘I Call It Art’ is designed to stimulate debate about inclusion in, and exclusion from, art and society.

There will also be a programme of videos, performances and other events running throughout the exhibition period.

The Pillars. The Fredriksen Family Collection

‘The Pillars’ presents work by pioneering international artists who for the most part have not been shown in the National Museum before. Representing a broad range of expressive forms, strategies and positions, collectively the display expands the museum’s narratives about the present and our recent past.

Several of the artists in the exhibition have struggled to find recognition. Some because they are of the “wrong” gender, orientation or cultural background, others because they have adopted artistic strategies that go against established norms. The works span a period of roughly a century, from the 1920s to the present. Artists include, among others, Georgia O’Keeffe, Sheila Hicks, Simone Leigh and Lynette Yiadom-Boakye.

East of the Sun and West of the Moon

The first exhibition in the prints and drawings gallery is a selection of drawings by Erik Werenskiold and Theodor Kittelsen done around 150 years ago as illustrations for Norwegian fairy tales. Collected and written down by Peter Christen Asbjørnsen and Jørgen Moe, these stories were passed down through the generations by oral tradition. Werenskiold’s and Kittelsen’s drawings were printed in the first illustrated book of fairy tales for Norwegian children, published in Copenhagen in 1879–1887.

The museum’s collection includes close to 500 fairy tale drawings and form a central element of Norway’s cultural heritage. Many are highly sensitive to light and are therefore rarely exhibited. The exhibition is specially designed for children and families.

The National Museum of Art, Architecture and Design