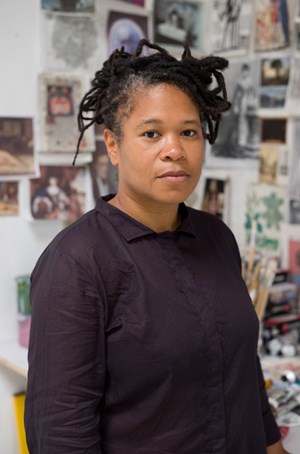 The Johannes Vermeer Prize 2021 has been awarded to visual artist Natasja Kensmil.

The Johannes Vermeer Prize 2021 has been awarded to visual artist Natasja Kensmil.

The Dutch state prize for the arts will be awarded on November 1, 2021 by Ingrid van Engelshoven, Minister of Education, Culture and Science. The jury, chaired by Andrée van Es, nominated her unanimously.

Natasja Kensmil knows how to make a connection between heritage and current events in her own way, and makes this visible on canvas and paper in a penetrating way.

The Johannes Vermeer Prize is the Dutch state prize for the arts with a 100,000 euros cash prize. The winner may spend the amount on a special project within their own field of activity.

The Dutch government established the award in 2008 to honor and promote exceptional artistic talent. The organization of the prize is in the hands of the six national culture funds, with the Mondriaan Fund as lead party, and can be awarded to artists from all artistic disciplines working in the Netherlands.