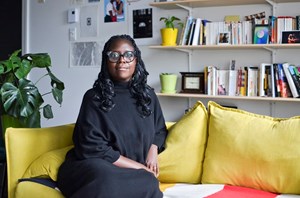 The Montreal Museum of Fine Arts (MMFA) has announced the appointment of Eunice Bélidor as the Gail and Stephen A. Jarislowsky Curator of Quebec and Canadian Contemporary Art (1945 till date).

"Eunice Bélidor has distinguished herself as a curator and a thought leader in her field, and I could not be happier to welcome her to the curatorial team of the MMFA. Her experience coupled with her interest in stimulating dialogue and in focusing on themes and discourses that are too often marginalized make her a tremendous asset for the MMFA. Her work will enrich our understanding of Quebec and Canadian art, and we are eager to discover the programming she will develop," noted Mary-Dailey Desmarais, Chief Curator, MMFA.

"I'm delighted to be joining the Museum, a great institution of my native city of Montreal. This opportunity will allow me to pursue my work of supporting artists and promoting Quebec and Canadian contemporary art in Montreal, Canada and abroad. Becoming a curator at the MMFA marks an important step in my career, and I'm eager to dive into this new role. I have already been met with open arms by Mary-Dailey Desmarais and the entire Museum team, who share my sensibilities" added Eunice Bélidor, the Gail and Stephen A. Jarislowsky Curator of Quebec and Canadian Contemporary Art (1945 to Today), MMFA.

Montreal native Eunice Bélidor has made her mark on the art world as an independent curator, art critic, author and researcher. From 2019 until most recently, she was Director of the FOFA Gallery at Concordia University. Prior to that, she worked at the artists' run centre articule in Montreal, The Power Plant Contemporary Art Gallery and the Black Artists' Networks In Dialogue (BAND) gallery in Toronto, and the Journal of Curatorial Studies. Her curatorial practice, in which she champions the voices of artists from diverse backgrounds, is rooted in a spirit of questioning and focuses, among other things, on feminism, design and letter-writing.

Recipient of the 2018 Hnatsyshyn Foundation's Emerging Curator Award, Bélidor has, over the course of her career, developed several exhibitions and projects in Montreal, Toronto and Berlin: the newsletter series Isolate in Style (2020), which disseminates the words of FOFA Gallery artists; the exhibition IGNITION 16 (with Michèle Tériault, 2020) at the Leonard & Bina Ellen Gallery; the Over My Black Body exhibitions (2019), co-curated with Anaïs Castro at the Galerie de l'UQAM; and Future Memories and Code: Body presented as part of the HTMlles Festival (2016 and 2018, respectively).

This dynamic curator and author holds a Bachelor's in Art History from Concordia University, Montreal, as well as a Graduate Diploma in Curatorial Studies and a Master's in Art History and Visual Culture from York University, Toronto. Her writings and essays have appeared in various publications, including Espace Art Actuel, Hyperallergic, Canadian Art and Inuit Art Quarterly.

Extremely active in the Canadian art community, Bélidor sits on the President's Task Force on Anti-Black Racism at Concordia University, the MNBAQ acquisition committee – actual and contemporary art, and the MMFA's Acquisition Committee – International Art After 1900. Previously, she was a member of the Visual Arts Evaluation Committee of the Conseil des arts de Montréal, from 2015 to 2018.