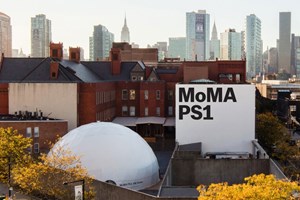 After a year on hiatus due to the pandemic, MoMA PS1 has released the list of artists that will present works at its fifth edition taking place at the “Greater New York” exhibition.

After a year on hiatus due to the pandemic, MoMA PS1 has released the list of artists that will exhibit at the “Greater New York” exhibition. The fifth edition of the event will now commence on October 7 and highlight 47 artists that are specific to the New York artistic community.

Although this exhibition was already forming before the pandemic started, the pool of work undeniably took shape as the pandemic ensued. Speaking on the matter, PS1 director Kate Fowle, stated in an interview, “This is an exhibition that’s not necessarily such a direct response to what’s happened, but has grown out of it.”

The cast of artists is a promising one, a mixture of old and new, that will surely uphold PS1’s reputation as one of New York’s premier art events. Artists such as Sean-Kierre Lyons, whose illustrations aim to amend the characters that mold Black American identity, with reference to visual lexicon of the Antebellum period of the American South, from the years of 1812 to 1815. Another one to look out for is photographer Hiram Maristany, who brilliantly documented Spanish Harlem during the 1960s.

“After what could be described as an uncompromisingly transformative year socially, politically, and personally, we continue to be in a powerfully transitional moment in New York,” said PS1 Director Kate Fowle. “This edition of Greater New York is a hard-hitting, intense show that foregrounds the resilience of the city, while channeling our collective need to reconnect and reflect. It honors the endurance and tenacity of artists to speak to the urgencies of their time.”

“Greater New York offers an opportunity to process, mourn, and celebrate alongside New York City’s artists and communities,” said Ruba Katrib, Curator, PS1 “The exhibition highlights artists who have worked persistently in New York City—in some cases over many decades and often without recognition—contributing to a more diverse and complex understanding of the incredible range of artists who give creative life to the city.”

Greater New York is organized by a curatorial team led by Ruba Katrib, Curator, PS1 with writer and curator Serubiri Moses, in collaboration with Kate Fowle, Director, PS1 and Inés Katzenstein, Curator of Latin American Art and Director of Patricia Phelps de Cisneros Research Institute for the Study of Art from Latin America, The Museum of Modern Art.

In recognition of the importance of artists to civic life in New York, PS1 continues to offer free admission to all New York City residents, made possible by The Horace W. Goldsmith Foundation.