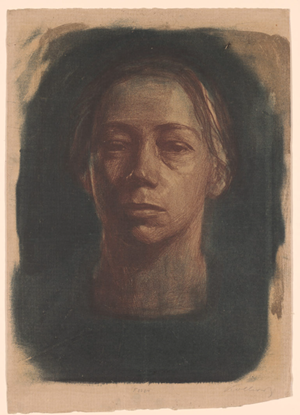 The Museum of Modern Art and Neue Galerie New York have jointly acquired Käthe Kollwitz’s Self-portrait en face (1904), one of the most extraordinary self-portraits made in the early years of the 20th century.

The Museum of Modern Art and Neue Galerie New York have jointly acquired Käthe Kollwitz’s Self-portrait en face (1904), one of the most extraordinary self-portraits made in the early years of the 20th century. The acquisition was supported at MoMA by the Abby Aldrich Rockefeller Endowment for Prints and a gift from Jack Shear, Marlene Hess and James D. Zirin, Alice and Tom Tisch (in honor of Marlene Hess), Kathy and Richard S. Fuld, Jr., Emily Rauh Pulitzer, Maud I. Welles, Ronnie Heyman (in honor of Marlene Hess), and Carol and Morton Rapp; and at the Neue Galerie by a gift from Jo Carole and Ronald S. Lauder.

Christophe Cherix, MoMA’s Robert Lehman Foundation Chief Curator of Drawings and Prints, said, “Käthe Kollwitz’s legacy looms large over the 20th and 21st centuries. Executed in 1904, early in the artist’s remarkable life, Self-portrait en face is both a monument in the history of printmaking and a work that speaks as much to its time as ours. We are thrilled for this exemplary work to enter MoMA’s collection, and excited to bring it to MoMA’s audiences this spring, where it is installed in our newly refreshed fifthfloor collection galleries.”

Käthe Kollwitz (German, 1867–1945) was born in the Prussian city of Königsberg (now Kaliningrad, Russia). She trained initially as a painter, but quickly turned to drawing and printmaking, which she saw as the most effective mediums for social criticism. (She also worked occasionally in sculpture.) Active in Germany
from the 1890s through the 1930s—a period marked by the first wave of feminism; the social ills wrought by industrialization, and the political upheavals of two world wars—Kollwitz used her work to confront the injustices of her time from a woman’s perspective, and to assert the female point of view as a necessary and powerful agent for change. Along with motherhood and the working class, self-portraiture was an important recurring theme in her work; she used it as a vital form of self-assertion and selfinterrogation.

Kollwitz was 37 years old when she created Self-portrait en face, and, against the odds for a woman artist and a printmaker, she had become one of the most acclaimed artists in Germany, renowned for her painstakingly complex, extraordinarily textured prints and for the deep compassion with which she
approached her subjects. She underscored her artistic ambitions in this self-portrait by taking a virtuoso approach to color printmaking and by presenting herself in a powerfully assertive frontal pose. Only 12 impressions of this lithograph are known, and they were created in a few different color variations; this example is remarkable for the depth and subtlety of its hues. The artist used a red-brown crayon to model the features of her face, a dark blue wash to dramatically frame her head, and an ocher undertone to impart a subtle, glowing depth. Joining 34 other prints by Kollwitz in MoMA’s collection, Self-portrait en face is one of the few works that Kollwitz created in color; after 1905 she restricted her palette to black and white.

As part of the spring collection rotation that will be complete on May 28, 2022, the work is now on view in gallery 504, alongside fellow German artist Paula Modersohn-Becker’s Self-Portrait with Two Flowers in Her Raised Left Hand (1907). Another rare and emblematic self-portrait by a woman artist in the early
modern period, the Modersohn-Becker painting was also jointly acquired by MoMA and the Neue Galerie, in 2017.

Additionally, MoMA plans to organize and present a major exhibition of Kollwitz’s work in the future, and will publish an accompanying scholarly catalogue.