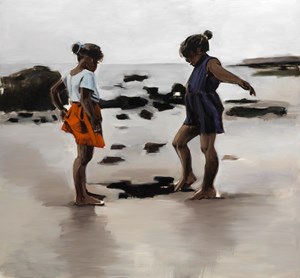 Moderna Museet in collaboration with Tate Britain, will on July 3, 2021 present the first major retrospective exhibition of the British artist and writer Lynette Yiadom-Boakye titled ‘Fly in League with The Night’ in Stockholm, Sweden.

Moderna Museet presents the first major retrospective exhibition of the British artist and writer Lynette Yiadom-Boakye titled ‘Fly in League with The Night’. The show features about 80 paintings spanning the artist’s entire career. The exhibition was shown at Tate Britain this last winter and spring.

The people in Lynette Yiadom-Boakye’s paintings are situated in an infinite time-space. There are no details revealing their connection to any specific time or place in history. The figures appear in everyday scenes, in intimate moments. They are often looking into the distance, or inwards – or straight at the viewer, as though commanding or asking a question. In some paintings, the persons are accompanied by wild animals: a fox, an owl or a parrot.

These works are not portraits in the sense that they depict actual people, and yet the characters have the air of being distinct, unique individuals. The ambiguous figures are based on the artist’s visual notes. One and the same person can consist of elements gathered from different people, found images, drawings, or from her own memories and imagination.

Lynette Yiadom-Boakye was born in London in 1977; her parents had moved to Britain from Ghana in the 1960s. After a foundation course at Central St Martin’s, Lynette Yiadom-Boakye decided to devote herself to painting. After attending art schools, including the Falmouth School of Art, she graduated in 2003 from the Royal Academy Schools in London. In the exhibition that now opens at Moderna Museet, visitors will meet some 80 paintings surveying the artist’s entire career, the most recent dating from 2020. The exhibition is produced in close collaboration with Lynette Yiadom-Boakye, and instead of organising the works chronologically, the artist has created contexts, moods and dialogues between the works.

In her east-London studio, Yiadom-Boakye works mainly with oil on canvas. Her paintings are improvised in conversations between canvas, brush and paint. Themes or subjects can evolve in the course of a day. Finished works are left to mature in the studio, entering into dialogue with new paintings – a method that is reflected in how the artist has composed this exhibition as a rhythmic and dramaturgical flow. Yiadom-Boakye never uses a ready-made black but mixes blues and browns to capture all the hues and nuances.

Lynette Yiadom-Boakye is also a writer and sees writing as another facet of the creative process in painting. In her own words, “I write about the things I can’t paint and paint the things I can’t write about.” The name of this exhibition, Fly In League With The Night, is from one of the artist’s poems, and the titles of the paintings can be seen as extensions of her prose. The catalogue also includes five excerpts from a detective novel by Lynette Yiadom-Boakye.

'Fly In League With The Night' was shown at Tate Britain this last winter and spring, and it is with great pleasure that the curator Matilda Olof-Ors now presents it at Moderna Museet.

"Lynette Yiadom-Boakye has developed a unique language that allows colour to speak for itself. It demonstrates her immense respect for and love of painting, and manifests the contemporary relevance of painting.”

The director of Moderna Museet, Gitte Ørskou, regards Lynette Yiadom-Boakye’s paintings to be among the most powerful oeuvres currently on the art scene.

“Lynette Yiadom-Boakye summons up new visual characters in her figurative paintings, and we are moved by the longing and loneliness embodied in her motifs. Yiadom-Boakye works in a tradition represented by major stars in painting here at Moderna Museet. We have longed to show this artist, and the collaboration with Tate has been stimulating.”