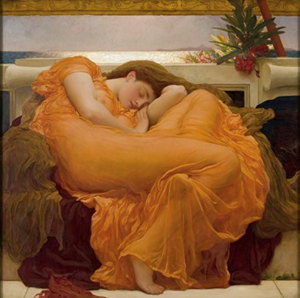 The Metropolitan Museum of Art, New York, will display five of the most important paintings from the collection of the Museo de Arte de Ponce, Puerto Rico, from October 8, 2022, through February 2024.

The Metropolitan Museum of Art, New York, will display five of the most important paintings from the collection of the Museo de Arte de Ponce, Puerto Rico, from October 8, 2022, through February 2024.

The loans include Frederic Leighton’s Flaming June (1895), an icon of Victorian painting; John Everett Millais’s The Escape of a Heretic, 1559 (1857); and the three scenes comprising the Small Briar Rose series by Sir Edward Burne-Jones (all painted 1871–73). Following a technical examination of Flaming June conducted by conservators, scientists, and imaging specialists at The Met, the five works will be displayed in the Museum’s galleries for 19th- and early-20th century European paintings and sculpture.

“These five works are some of the most magnificent examples of Victorian painting in the world. Few works rival the beauty of Leighton’s Flaming June or the impressive artistry of Millais’s and Burne-Jones’s paintings,” said Max Hollein, Marina Kellen French Director of The Met. “We are delighted to offer our visitors the unique opportunity to view these incredible works from the Museo de Arte de Ponce in a meaningful dialogue with The Met’s own collection. We extend our gratitude to our colleagues in Puerto Rico for their generosity and partnership.”

“We are thrilled to collaborate with The Met as part of our efforts to share the Museo de Arte de Ponce’s coveted works while our main galleries are closed for repair following the devastating earthquakes of January 2020,” shared Cheryl Hartup, Director of the Museo de Arte de Ponce. “These five remarkable paintings are part of the cultural patrimony of Puerto Rico. Indeed, Flaming June is one of the most beloved works of art on the island, and one of the most recognized and reproduced images in British art. We hope the public will take advantage of this extraordinary opportunity to see these works in New York.”

The selection of loans was made with an eye toward illuminating relationships between works in the Museo de Arte de Ponce’s and The Met’s collections. Flaming June and the Small Briar Rose series, for example, will be displayed along with works by Leighton and Burne-Jones in Gallery 800, a grand entryway to the galleries. Gallery 808, the dedicated gallery for 19th-century British painting, will host The Escape of a Heretic, 1559.

Most notably, the presentation will bring together Flaming June and Leighton’s Lachrymae (1894–95, The Met). These are two of Leighton’s last monumental oils, made during the same painting campaign, and first exhibited, together, in the artist’s studio in 1895—yet their formal and thematic connections have never been fully appreciated. Although the two works have been in several exhibitions together, this is the first time that they will be displayed side by side.

The Small Briar Rose series—The Prince Enters the Wood, The King and His Court, and The Sleeping Beauty—will be displayed alongside Burne-Jones’s The Love Song (1868–77, The Met), which was commissioned by the same patron, William Graham, whose romantic tastes profoundly shaped the artist’s style. This reunion can occur only at The Met, as The Love Song’s fragile condition has prevented it from traveling since 2006.

The Escape of a Heretic, 1559 will be paired with Millais’s Ferdinand Lured by Ariel (1848–49), which is on long-term loan to The Met from a private collection. The presentation of two early works by Millais can be seen in no other museum outside the United Kingdom. It encapsulates the artistic development of Millais, the most accomplished of all the Pre-Raphaelites, as his stringent naturalism gave way to a more broadly appealing style.

In the weeks leading up to the display, Flaming June will undergo technical examination and analysis in The Met’s Paintings Conservation and Scientific Research departments, using techniques including infrared reflectography, X-radiography, and macro-X-ray fluorescence. The painting has never before undergone such an in-depth study, raising the potential for new insights into the development of Leighton’s composition.

A program of scholarly study will accompany the partnership.