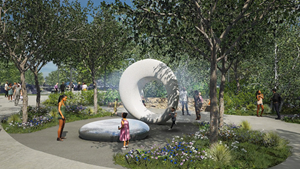 On his 61st birthday, President Obama announced that the Water Garden at the Obama Presidential Center in Chicago will be named in honor of his mother, Ann Dunham, and will be anchored by a commissioned art installation from Maya Lin.

On August 4, 2022, which is his 61st birthday, President Obama announced that the Water Garden at the Obama Presidential Center in Chicago will be named in honor of his mother, Ann Dunham, and will be anchored by a commissioned art installation from Maya Lin. Lin’s work, titled Seeing Through the Universe, will feature an upright "oculus" piece that mists and a flat "pebble" piece that fills with water and then cascades over. Located near the Center’s north entrance, the Water Garden will serve as a place for reflection and relaxation.

"When we thought about what may be a fitting way to commemorate my mother’s influence on my sister and me, I thought about where she would want to be in this space," said President Obama. "I could picture her sitting on one of the benches on a nice summer afternoon, smiling and watching a bunch of kids running through the fountain, and I thought that would capture who she was as well as just about anything else."

This commission comes six years after Lin was awarded the Presidential Medal of Freedom, the nation’s highest civilian honor, by President Obama.

The Obama Presidential Center broke ground in September 2021 and is estimated to bring more than 700,000 visitors to the South Side of Chicago each year. The Center is expected to open its doors in 2025.