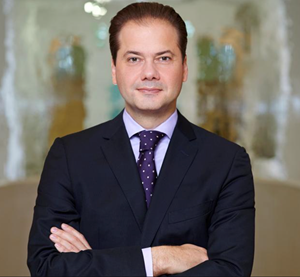 The Board of Directors of the Metropolitan Museum of Art has voted that Max Hollein will add to his title Chief Executive Officer effective July 1, 2023, when current Met President and CEO Daniel H. Weiss steps down as previously announced.

The Board of Trustees of The Metropolitan Museum of Art has voted that Max Hollein, who is presently serving as Marina Kellen French Director of the Museum, will add to his title Chief Executive Officer effective July 1, 2023, when current Met President and CEO Daniel H. Weiss steps down as previously announced. At that time, the Director and CEO will be responsible for the overall leadership of the Museum.

At its meeting, the Board unanimously passed a resolution based on the work of a subcommittee, that concluded that, during his four-year tenure as Director, Hollein has proven himself to be a creative, energetic, and inspired leader of the Museum, and was the clear choice to serve as the next CEO. The subcommittee noted the strong partnership that Hollein and Weiss have forged, navigating together through the unprecedented challenges of recent years; the impact of the programming Hollein has brought to the Museum; and his standing as a leader in the cultural field.

“We are delighted to appoint Max to lead The Met into the future,” said Board of Trustees Co-Chairs Tony James and Candace Beinecke. “He has overseen the programmatic side brilliantly during this most turbulent period—finding a way to create an environment where the incomparable Met staff have been able to excel—while also benefitting from the partnership and stewardship of Dan Weiss, whose leadership and mentorship has been extraordinary. The Met is extremely fortunate to have a great leader in Dan for this next year, and to have Max ready and able to lead in future years.”

Max Hollein was appointed Director of The Met in 2018, following leadership tenures at the Fine Arts Museums of San Francisco and, before that, three of Germany’s most prestigious art institutions, including the Städel Museum, Frankfurt. “I am greatly humbled by this appointment. The Met is an inspiration to all who visit, and to all of us who have the honor of working here,” said Hollein. “The energy, ambition, and creativity of my Met colleagues enables the Museum to be a place where people can come together to learn, share, create, and experience joy. It is a great privilege to be a part of The Met’s accomplishments these past years, and I am deeply thankful to all of my colleagues, to supporters of the Museum, and to the Board. I am particularly grateful for the great partnership with Dan Weiss and the counsel he has provided and on which I will be relying during the upcoming year and beyond.”

In recent years, the role of CEO has been held either by the Director or the President, as determined by The Met’s Board. The Board will review the roles of additional leadership this fall, determining what structure will best serve the Museum in the future.

“Max has built an exceptional program for The Met during these past four years, and I am confident he will be ready to lead our Museum into the future,” said Weiss. “The Met is a perpetual institution, and each generation of leadership is merely a steward for those that will follow. This is a very large responsibility, and I have been heartened and inspired at the care Max exhibits towards our Museum and the cultural field.”

As Director of The Met, Hollein has introduced a number of initiatives aligned with his vision to broaden the ways that audiences and scholars engage with the collection—both in person and online—and with the Museum’s iconic galleries at its Fifth Avenue building and at The Met Cloisters in northern Manhattan. Notable among his recent accomplishments are multiple initiatives that feature increased interdisciplinary presentations of works and that ultimately provide new, multi-faceted narratives and interpretations of art and history. In this spirit, Hollein also introduced a series of contemporary commissions for the Museum's Great Hall and its facade niches, spaces that have since featured a diverse array of well-known and emerging artists creating work inspired by The Met collection, including Kent Monkman (2019), Wangechi Mutu (2019), Carol Bove (2021), and Hew Locke (opening September 2022).

During the COVID-19 pandemic of 2020, Hollein championed the presentation of a robust slate of exhibitions, digital initiatives, and programs—and a poignant facade display by Yoko Ono—when The Met reopened after a five-month closure as a signal of appreciation to New York. Major ambitious exhibitions that have come to fruition under his directorship include The Medici: Portraits and Politics, 1512–1570 (2021), Alice Neel: People Come First (2021), and Winslow Homer: Crosscurrents (2022), as well as complex reexaminations of the collection, such as Fictions of Emancipation: Carpeaux Recast (2022), Before Yesterday We Could Fly: An Afrofuturist Period Room (2021), Crossroads (2019), The African Origin of Civilization (2021) and Chroma: Ancient Sculpture in Color (2022). The Met has a number of major capital projects underway that benefit from Hollein’s guidance including the renovation of The Michael C. Rockefeller Wing (which houses the Museum’s collections of art from the ancient Americas, sub-Saharan Africa, and Oceania), led by Kulapat Yantrasast of the firm wHY; the galleries for ancient Near Eastern and Cypriot art, led by Nader Tehrani of NADAA; and the renovation of the Museum’s Tang Wing for modern and contemporary art, led by Frida Escobedo. Hollein also leads the Museum’s collecting activities, and in his tenure a number of outstanding works have been acquired that expand, diversify, and deepen the stories that can be told throughout The Met’s galleries. Hollein has also significantly expanded The Met’s curatorial voices through important new hires.

Prior to joining The Met, Hollein was the Director and CEO of the Fine Arts Museums of San Francisco, where his tenure was characterized by visionary programming, pioneering acquisitions, and rigorous fiscal management. Previously he simultaneously led the Schirn Kunsthalle, the Städel Museum, and the Liebieghaus in Frankfurt, Germany, as Director and CEO, all of which experienced notable growth and increased attendance during his tenure.

Born in Vienna, Hollein studied at the University of Vienna (Master of Art History) and the Vienna University of Economics (Master of Business Administration). He began his career at New York's Guggenheim Museum as Chief of Staff to the Director and six years later assumed his leadership role in Frankfurt. Hollein has published and lectured widely and has organized a number of major exhibitions in modern and contemporary art. Named a Chevalier of the Ordre des Arts et des Lettres by the French Minister of Culture in 2009 and a recipient of the Austrian Cross of Honor for Science and the Arts, he received the Goethe badge of honor (the Hessian Ministry of Culture's highest accolade) in 2016, and an Hommage award by the Konrad Adenauer Stiftung in 2020, among other international awards.