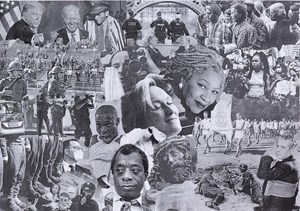 Marcel Odenbach (*1953 in Cologne) will be awarded the 2021 Wolfgang Hahn Prize by the Gesellschaft für Moderne Kunst on November 16, 2021.

Marcel Odenbach (*1953 in Cologne) will be awarded the 2021 Wolfgang Hahn Prize by the Gesellschaft für Moderne Kunst on November 16, 2021.

The award ceremony always also includes an acquisition for the collection of the Museum Ludwig. Thanks to Marcel Odenbach’s generosity, the Gesellschaft für Moderne Kunst am Museum Ludwig will acquire his unique Schnittvorlagen for the 2021 Wolfgang Hahn Prize.

The Schnittvorlagen were created over the course of decades. They function as an ongoing image archive, and at the same time the more than 117 works on paper in A3 format represent the current foundation of the artist’s work. Each work focuses on a specific topic. Odenbach arranges conceptually or visually corresponding motifs that he takes from magazines, brochures, and many other sources. The collages are modified and incorporated into new works in which the artist deals with social and political processes such as constructions of gender and cultural identity, colonization, and globalization. His working method corresponds to his conceptual approach of finding, assembling, collaging, and dissolving.

The Schnittvorlagen will be shown in an exhibition at the Museum Ludwig from November 17, 2021 to February 20, 2022. They have never been seen in pubic before. As the basis for the artist’s work, the Schnittvorlagen will be returned to Odenbach’s studio after the exhibition, where they will continue to be available to him as an image repository and archive on permanent loan.

“We consider ourselves extremely lucky to award Marcel Odenbach the 2021 Wolfgang Hahn Prize. Despite his great importance, he is still not as well known as he deserves to be. It is a special privilege to be able to acquire his Schnittvorlagen for the collection of the Museum Ludwig. These are a central basis for his work as an artist and are of immeasurable intellectual value. We are very grateful to Marcel Odenbach for his generosity,” says Mayen Beckmann, chairwoman of the Gesellschaft für Moderne Kunst.

“We see it as a sign of great trust that Marcel Odenbach has provided us with his Schnittvorlagen, perhaps his most personal works, which form the essence of his work as an artist. In my view, artists’ archives are central to understanding their work. Odenbach’s Schnittvorlagen are also important works in their own right,” adds Yilmaz Dziewior, director of the Museum Ludwig.

Marcel Odenbach was born in 1953 in Cologne and lives and works in Cologne, Berlin, and Cape Coast, Ghana. The artist had his first institutional solo exhibition as a student in 1978 at de Appel in Amsterdam. This was followed by solo exhibitions at venues including the Kölnischer Kunstverein (1979), the Institute of Contemporary Art in Boston (1986), the Centre Georges Pompidou in Paris (1987), the Hamburger Bahnhof in Berlin (2006), the Kunstmuseum Bonn (2013), the Tel Aviv Museum of Art (2016), and the Kunsthalle Wien (2017). Until the spring of 2021, he taught film and video at the Kunstakademie Düsseldorf. From October 9, 2021 to January 9, 2022, Odenbach’s work will be on view in the retrospective Marcel Odenbach: so oder so at the Kunstsammlung Nordrhein-Westfalen K21 in Düsseldorf.

The extensive catalogue Marcel Odenbach: 2021 Wolfgang Hahn Prize, edited by Carla Cugini, with texts by Susanne Pfeffer and Yilmaz Dziewior, will be published by Walther and Franz König and will be available for 25 euros in bookshops. Pages: 264, Amount of illustrations: 117 b/w (4c print), width x height cm): 29,5 x 20,8 cm

The award ceremony and opening will take place on November 16, 2021 at Museum Ludwig, Cologne.