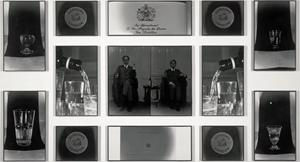 This exhibition paints an imaginary portrait of Marc De Cock through artworks from the Matthys-Colle Collection and S.M.A.K. The selection represents his personality and commitment and reads like a visual essay.

Marc De Cock and his wife came into contact with the Association in the early 1960s via the organisation Jeugd en Plastische Kunst. His interest in contemporary art was also expressed in his contribution to the selection and organisation of various exhibitions, including Forum voor Grafiek in both 1969 and 1971, and Figuratie/Defiguratie in the Museum of Fine Arts in 1964. He was also appointed exhibition commissioner for Artisti (della Fiandra)/Artists (from Flanders), which was shown at the Venice Biennale in 1990. Marc De Cock created exhibitions with Willy De Sauter, Ann Veronica Janssens, Luc Tuymans, Mike Kelley and Robert Gober, amongst others, during his chairmanship of the Association (1979-1995).

This exhibition paints an imaginary portrait of Marc De Cock through artworks from the Matthys-Colle Collection and S.M.A.K. The selection represents his personality and commitment and reads like a visual essay.