Manifesto by The Brazilian Academy of Sciences (ABC): Life and Death of Brazilian Science and Memory 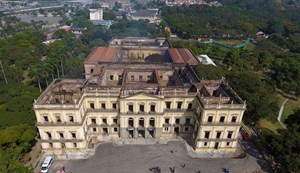 The Brazilian Academy of Sciences (ABC), the Brazilian Society for the Advancement of Science (SBPC), and over 50 other scientific entities in the country announce a manifesto in defense of the National Museum in Rio de Janeiro, Brazil, and the cultural and scientific heritage of the country

Image: The National Museum of Brazil, destroyed by fire

The Brazilian Academy of Sciences (ABC), the Brazilian Society for the Advancement of Science (SBPC), and over 50 other scientific entities in the country announce a manifesto in defense of the National Museum in Rio de Janeiro, Brazil, and the cultural and scientific heritage of the country

In the face of a dramatic spectacle of the flames engulfing the National Museum, in Rio de Janeiro, Brazil, and, with it, an important part of the national science and memory, the Brazilian Academy of Sciences (ABC), the Brazilian Society for the Advancement of Science (SBPC), as well as over 50 Brazilian scientific societies, express sorrow and indignation and urge the Brazilian society to actively participate in the defense of the cultural and scientific heritage of the Nation.

As if the threat to the future of the nation linked to the severe budget cuts that have affected the country's scientific and technological development was not enough, the memory of the past, essential for the construction of national identity, is now gone.

The death of the National Museum has a symbolic meaning that goes beyond this immense loss to the Brazilian culture. Other national assets are also perishing: with much concern we are witnessing the deindustrialization of the country, the precariousness of scientific education in secondary school, the scrapping of research laboratories in universities and other science and technology institutions and the exodus of young researchers; the aftermath of an economic policy that ignores the essential role of science, education, culture and innovation for the development of a country. This policy has been treating resources for S&T as expenditures, not as investments with high return potential, which could contribute to the increase of the GDP and to the prominence of nations in the contemporary world.

In this moment of mourning, in which our entities sympathize with fellow researchers, civil servants and students of the National Museum, a joint effort is required to rebuild the Museum. The goal will certainly not be the impossible reconstruction of the lost collections or the irretrievable historical and scientific treasures that had fueled research in this institution. It will be a reconstruction of an idea that fire cannot devour, a museum that serves as a reference for future generations, repeating the formula that was present in its history, of a historical and scientific heritage supported by scientific research, bringing together, thus, indissolubly, memory and inquiry, the past and the future. 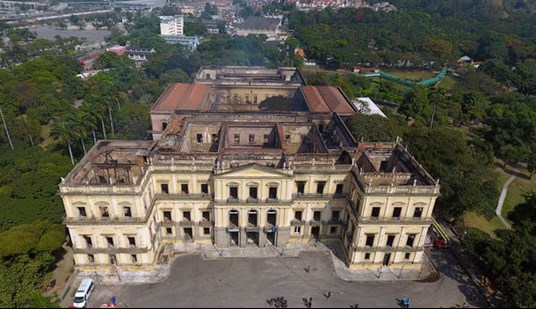 Image: The National Museum of Brazil, destroyed by fire

It is urgently necessary the release of emergency funds for the National Museum, and to guarantee the security of the current building, to establish suitable workplaces for the researchers, and to enable expansion of the museum area by adjudicating the nearby land already claimed by the museum's management, moving administrative, research, collection and postgraduate teaching activities that used to be hold in the Palace to this new space. This, together with adequate budgetary appropriations for the future, would allow the institution to continue its teaching and research activities and to hold public exhibitions, along with the associated services of museology, science divulgation and assistance to teaching.

The flames that devoured the National Museum have sent a warning message to the Brazilian society. In order to save the country's historical, cultural and scientific heritage, concrete measures and the effective establishment of public policies, such as those proposed in the Blue Book of the IV National Conference on Science, Technology and Innovation (held in 2010, in Brazil), are necessary. It is essential that proper and urgent actions are taken in order to save science, technology and innovation in the country. It is imperative to prevent these flames from spreading and knocking down the future of Brazil.