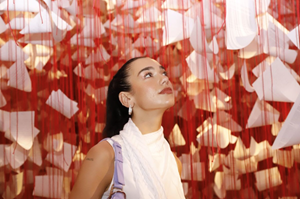 Three weeks after the biennial preview days in Prishtina, Manifesta 14 has shared that there have been over 30,000 visits to the 25 venues across Kosovo’s capital city.

Three weeks after the biennial preview days in Prishtina, Manifesta 14 has shared that there have been over 30,000 visits to the 25 venues across Kosovo’s capital city.This figure does not include the thousands of visitors who have interacted with the artistic interventions within the public squares, such as Adem Jashari Square or the Green Corridor, a major urban greening intervention that creates a new pedestrian path across Prishtina to improve the city’s mobility.Their collective approach to programming, a core Manifesta principle since the early days of the biennial, has paid off with incredible engagement from local communities and cultural leaders in Kosovo.

The Centre for Narrative Practice, Manifesta’s first permanent cultural institution in its 25 years of history, has in its opening weeks established itself as a new centre for multi-disciplinary cultural and educational activities in the city of Prishtina. With dozens of performances, readings, and discussions, along with free workshops on podcasting, self-publishing, and storytelling, its lively interdisciplinary programme is in full swing. Initially conceptualised and developed by Manifesta and curated by Catherine Nichols, at the end of the biennial Manifesta will announce how they will guarantee the long-term strategy for funding and management of this cultural institution for the future.

Manifesta 14 Prishtina has welcomed press coverage from a large array of international and local media, including The Economist, Die Presse, Le Monde, NRC, El País, Frankfurter Allgemeine Zeitung, Wallpaper, and many more. While overwhelmingly positive about the artistic and urban interventions, Manifesta is delighted to see that the media attention Manifesta 14 Prishtina has brought to Kosovo’s capital city has also initiated numerous conversations about the isolation of Kosovo in Europe and the need for visa liberalisation for Kosovar citizens. This is in line with the Open Call Manifesta made during their opening press conference on the 20th of July 2022.