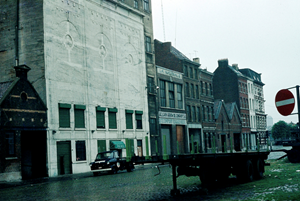 ...After visiting KMSKA and enjoying the terraces of the surrounding cafés, such as the Hopper, l'Entrepôt du Congo or Zurich, visitors to Antwerp this autumn will be able to enjoy an ambitious panorama of contemporary art at M HKA.

What can a museum bring to the party when its sister institution reopens after more than a decade? After visiting KMSKA and enjoying the terraces of the surrounding cafés, such as the Hopper, l'Entrepôt du Congo or Zurich, visitors to Antwerp this autumn will be able to enjoy an ambitious panorama of contemporary art at M HKA.

As the Flemish fine arts collection finally regains its place in the extensively renovated KMSKA (Royal Museum of Fine Arts), the Flemish community has also begun the next infrastructural leap that will raise the Flemish museum landscape to a more international level. As previously announced, a new building dedicated to contemporary art will be realised for M HKA, the Flemish community's second cultural heritage institution. A new architectural contest for its design will be launched later this year. The future building will make the collection of contemporary art  more visible and more located within a consistent narrative.

M HKA is already beginning the important work in anticipation of its new museum building, which will include substantial permanent collection displays. With this in mind, M HKA is complementing the grand reopening of its sister institution with a preview of what is to come. Visitors to the reopened KMSKA this autumn will also be able to visit a major temporary exhibition with 24 pieces of a future puzzle  ̶  24 key international artistic figures  ̶  that may be presented later in the new Flemish contemporary art museum.

Focusing on an expanded image of the museum’s collection, the exhibition seeks to reflect its longer-term aspirations by presenting the work of several artists that are considered strongholds within the collection alongside artists the museum is seeking to include in the years to come, or strengthen their presence. Alongside the grande finale of a decade of renovation of KMSKA, this exhibition at M HKA signals the beginning of a new trajectory.

The exhibition is named after a key book on the particular praxis of contemporary art museums, "Museum in Motion", as this is the specific reflection that will be undertaken in the years to come. The museum will have to develop its historiography alongside the building process. The opening of this conversation consists of a concise selection made collectively by M HKA’s artistic and collection teams of two dozen artists, which they believe should become part of our frame of reference. Some of the usual suspects are absent because they are already an acknowledged part of the reference frame. Presented across both main floors of the museum, this is rather a first ambitious, indicative prefiguration, opening up a reflection that will continue as the new building also takes shape.