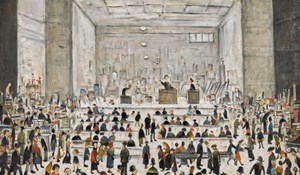 The artist’s only known painting of an auction room will make its debut in Sotheby’s modern British Art auction this November.

The artist’s only known painting of an auction room will make its debut in Sotheby’s modern British Art auction this November.

“There can be few paintings more apt for auction than Lowry’s own auction scene, a work that captures the buzz of an auction in a manner that only Lowry, with his distinctive iconography, could. The artist was no stranger to auction himself, and as an avid collector of clocks and Pre-Raphaelite art, he indulged his passion with bids in salerooms from Manchester to London. He often kept track of his own pictures passing through Sotheby’s later in life, witnessing an appreciation for his work that formed a total contrast to the outset of his career when he struggled for recognition. The pleasing circularity of The Auction’s appearance at Sotheby’s would no doubt have satisfied Lowry’s wry sense of humour – a case of life imitating art." Frances Christie, Deputy Chairman of Sotheby’s UK & Ireland

One of Britain’s most beloved artists, L.S. Lowry and his works have been a mainstay at auctions for decades. What is lesser known is that he once turned his hand to painting an auction taking place, resulting in a bustling scene characteristic of the artist. Populated by familiar characters, and even a dog on a lead, The Auction transports the viewer into the centre of the action, with the auctioneer on the rostrum poised to bring the gavel down.

Executed on a large-scale in 1958, the work has never been offered at auction, and was acquired by the present owners over two decades ago. It was exhibited at Lowry’s landmark retrospective at the Royal Academy in 1976 and was last shown at AMNUA in Nanjing in China in 2014. The Auction will now star in Sotheby’s Modern British Art auction in London on 23 November with an estimate of £1,200,000 – 1,800,000, ahead of which it will be exhibited to the public from November 18 - 22, 2021.