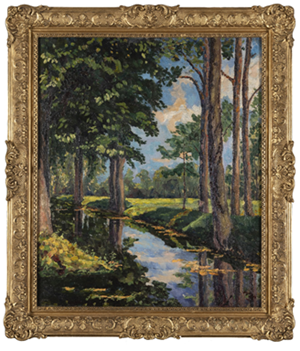 An extraordinary emblem of the celebrated friendship between British Prime Minister Sir Winston Churchill and Greek shipping magnate Aristotle Onassis, The Moat, Breccles will be offered in Phillips’ 20th Century and Contemporary Art Evening, this June.

An extraordinary emblem of the celebrated friendship between British Prime Minister Sir Winston Churchill and Greek shipping magnate Aristotle Onassis, The Moat, Breccles  will be offered in Phillips’ 20th Century and Contemporary Art Evening Sale on 23 June 2021, estimated at $1.5-2 million. Painted in August 1921, the painting by Churchill was gifted to Aristotle Onassis in 1961, and hung in the saloon of the Onassis yacht, the Christina.

Jean-Paul Engelen, Deputy Chairman and Worldwide Co-Head of 20th Century & Contemporary Art, said, “Two of the most influential figures of the 20th century, Churchill and Onassis formed a remarkable friendship, which Churchill sought to honor by gifting a work that he treasured in his own private collection for forty years. Long thought to have been lost, The Moat, Breccles was in fact aboard the Christina and is now being sold by the Onassis Family a century after its creation and fifty years after it was generously gifted by the statesman to the family.”

The Story of Friendship

Churchill’s son, Randolph, introduced Churchill to Onassis at a dinner in La Pausa, France, on 16 January 1956. The introduction sparked a friendship that would prompt Onassis to invite Churchill and his wife, Clementine, to a dinner party on his yacht the Christina. Churchill was not only impressed by Onassis’ hospitality, but also the yacht which he described once in a letter to his wife, Clementine, of 8 February 1956, as: “the most beautiful structure I have seen afloat.” 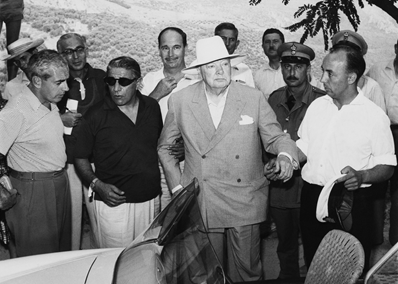 A close friendship between the two men developed. During the period 1958-1963 Churchill, often accompanied by his wife, made eight cruises in the Mediterranean and the Atlantic on the Christina. Onassis went to great lengths to make each cruise as easy and comfortable for the elder statesman. Celia, Sir Winston’s granddaughter, observed that her grandfather had aged considerably after his retirement and was wonderfully happy on the yacht and those pleasurable holidays appeared to give him renewed life. Onassis, apart from being one of Churchill’s great admirers, enjoyed his company and could often be found in deep conversation with Churchill, listening to his views.

While onboard the Christina, Churchill visited many locations, and it was on the yacht that he made his final visit to the United States in 1961. Onassis and his celebrated guest crossed the Atlantic from Gibraltar and cruised the West Indies before proceeding to New York City.

The Moat, Breccles was first mentioned in “Painting as a Pastime,” an essay written by Sir Winston Churchill, which was first published in The Strand Magazine, December 1921. Painting became his lifelong hobby and he freely admitted that it revived his spirits and, as with writing, became an antidote to his frequent bouts of depression. Churchill explained painting “as a means to relieve his mind from the demands of leadership.”  He began with watercolor but soon applied himself to oils. The Moat, Breccles was one of several paintings personally selected by Churchill to be included in the essay and in 1964, was prominently featured in a film documentary, “The Other World of Winston Churchill” on the Christina.

Opening on 17 June, leading up to the auction, Phillips will recreate Aristotle Onassis’ iconic bar on the Christina, affectionately known to its many guests as Ari’s Bar, in the auction house’s new headquarters at 432 Park Avenue, with The Moat, Breccles taking center stage.