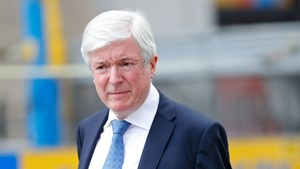 Ex-BBC director general Lord Hall has resigned as National Gallery chairman amid the uproar after an inquiry into Panorama's Princess Diana interview.

Ex-BBC director general Lord Hall has resigned as National Gallery chairman amid the uproar after an inquiry into Panorama's Princess Diana interview.

Lord Hall, who was director of news when Martin Bashir used deception to get the 1995 scoop, said his continued presence would be a "distraction".

The inquiry described an internal probe led by Lord Hall in 1996 into what happened as "woefully ineffective".

Diana's brother Earl Spencer has asked the Met Police to investigate the BBC.

A spokesman for the force would not comment on whether Metropolitan Police Commissioner Cressida Dick had received a letter from Earl Spencer, who has alleged his sister was the victim of blackmail and fraud.

Earlier this week, the Met said it would assess the new report "to ensure there is no significant new evidence", after previously deciding against a criminal investigation.

What is the Diana interview row all about?

Timeline of the controversy

What next for the BBC?

The independent inquiry by former senior judge Lord Dyson found Bashir was unreliable and dishonest, and that the corporation fell short of its high standards when answering questions about the interview.

It also found that Bashir seriously breached BBC rules by mocking up faked documents, which he showed to Earl Spencer to obtain the interview.

Since the report was published on Thursday, the Duke of Cambridge has blamed BBC failings for fuelling his mother's paranoia and worsening his parents' relationship. The Duke of Sussex has also spoken about the hurt caused by the interview.

A senior Tory MP has said the BBC still has questions to answer over the interview.

Julian Knight, chairman of the House of Commons Digital, Culture, Media and Sport Select Committee, which scrutinises the BBC, said he wanted to know why Bashir was rehired as a correspondent in 2016 - when Lord Hall was director general - and later promoted to religion editor.

He also said the BBC should have an "open mind" about compensation for whistleblowers, such as graphic designer Matt Wiessler, who raised concerns about fake bank statements he produced for Bashir.

The BBC has defended rehiring Bashir, saying the post was filled after a competitive interview process.

Bashir left the BBC earlier this month without a pay-off.

The inquiry was commissioned by the BBC last year, after Earl Spencer went public with his concerns about the tactics used to get the interview.

Broadcast in November 1995, the interview marked the first time a serving royal had spoken in such candid terms about life in the Royal Family or relationships with other royals.

The princess spoke about her unhappy marriage to Prince Charles, and famously said: "There were three of us in this marriage." Shortly afterwards, the Queen wrote to Prince Charles and Princess Diana telling them to divorce.

The princess died in 1997, after the car she was in crashed in the Pont de l'Alma tunnel, in Paris.

Lord Hall had been a trustee of the National Gallery since November 2019, and became chairman of the board in July 2020.

In a statement announcing his resignation, Lord Hall added: "I am very sorry for the events of 25 years ago and I believe leadership means taking responsibility."

What did the inquiry conclude?