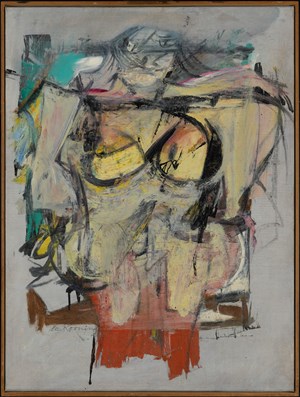 More than 30 years after it was cut from its frame, ripped from its backing, rolled up, and stolen from the University of Arizona Museum of Art (UAMA), Willem de Kooning’s painting Woman-Ochre (1954 – 1955) will once again be seen by the public in the exhibition Conserving de Kooning: Theft and Recovery.

More than 30 years after it was cut from its frame, ripped from its backing, rolled up, and stolen from the University of Arizona Museum of Art (UAMA), Willem de Kooning’s painting Woman-Ochre (1954 – 1955) will once again be seen by the public in the exhibition Conserving de Kooning: Theft and Recovery.

The painting will go on view at the Getty Center June 7 – August 28, 2022, after undergoing a challenging and long-awaited conservation treatment.

“The Getty Museum’s Paintings Conservation department has had a long history of conserving works of art that belong to other institutions from around the world, many of which have faced unique challenges,” says Timothy Potts, Maria Hummer-Tuttle and Robert Tuttle Director of the J. Paul Getty Museum. “This project certainly counts amongst the most interesting and challenging for the team and has allowed us, together with colleagues at the Getty Conservation Institute, to bring this extraordinary painting, which was long feared lost, back to life.”

Woman-Ochre was stolen from UAMA on November 29, 1985. Security guards described two suspects, a man and woman, who visited the museum the morning of the theft. No one was ever prosecuted, and the case remained unsolved for decades. The painting was missing for more than 30 years before it was discovered by the owners of an antiques store in New Mexico who immediately returned it to UAMA.

“Getty’s team of scientists and conservators lent their expertise to a very complex project, with transformative results,” said University of Arizona President Robert C. Robbins. “We are truly grateful to Getty for their partnership and their meticulous work restoring such an important piece of artwork with a storied past.”

Getty and UAMA announced in 2019 that the painting would travel to the Getty Center for study, repair, cleaning, conservation, and documentation. The Getty Museum’s Paintings Conservation department and the Getty Conservation Institute’s (GCI) laboratories offered their facilities and expertise free of charge.

Badly damaged in the heist, the painting was a special challenge to Getty’s team of paintings conservators and scientists.

“The painting came to us in very poor shape. The brutal way in which it was ripped from its lining caused severe paint flaking and tears, not to mention the damage caused by the blade that was used to slice it from its frame,” said Ulrich Birkmaier, senior paintings conservator at the Getty Museum. “To bring a painting from such dire condition to a place where it can now be safely exhibited is an immense achievement.”

With the paint bonded to the canvas and the varnishes removed, a new lining reunited the painting’s original edges with the canvas that was cut from the frame. Finally, conservators began the painstaking process of filling each area where paint was lost, using reversible conservation pigments (contemporary conservators perform their work in a minimally invasive way, with reversible materials that can be removed later if needed). The result is a painting that has been brought closer to how it looked before the theft.

After Getty’s exhibition, the painting will return to the University of Arizona in fall 2022.

A feature documentary about the infamous theft, “The Thief Collector,” will be released in 2022. The XTR film is directed by Allison Otto and produced by Caryn Capotosto, Jill Howerton, and Joshua Kunau.