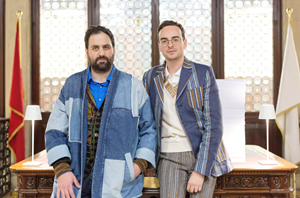 LIAF, Lofoten International Art Festival celebrates its 30th anniversary this year. The upcoming edition is curated by the Italian duo Francesco Urbano Ragazzi and is entitled Fantasmagoriana. It runs from September 3 to October 2 of 2022, at the North Norwegian Art Centre in Svolvaer and at five sites in the city of Kabelvåg.

The city of Kabelvåg was chosen because it’s both the place where Dada artist Kurt Schwitters was confined during the Nazi occupation of Norway, and because it’s now home to the film school Nordland kunst- og filmhøgskole, which offers excellence in moving image education. The school’s headquarters stand next to the former prison of the city. Its presence is therefore a symbol of healing and evolution.

LIAF is the longest-running contemporary art biennial in Scandinavia. The festival has a nomadic character and is held every two years at different venues in the Lofoten islands, an archipelago above the Arctic Circle. The extreme context in which LIAF operates has always dictated a sustainable production system that integrates with the complex natural and cultural ecosystem of the area. The North Norwegian Art Centre has been responsible for LIAF since 2009.

About Lofoten International Art Festival: LIAF is a biennial festival for contemporary art taking place in Lofoten, a cluster of islands located on the Northern Coast of Norway, just above the Arctic Circle. Since 1999, LIAF has presented works by international artists in a local and site-specific context. LIAF acknowledges the complexity of place and seeks to be a discursive, engaged and social platform for different positions creating dialogue between the local and global. Since 2009, the festival has been run by the North Norwegian Art Center (NNKS) and LIAF’s Artistic Advisory Board. LIAF and NNKS receive operational support from the Arts Council Norway, the counties of Finnmark, Troms and Nordland, and the municipality of Vågan. About the Lofoten Islands Lofoten is an archipelago and a traditional district in the county of Nordland, Norway. Though lying within the Arctic Circle, the archipelago experiences one of the world’s largest elevated temperature anomalies relative to its high latitude. Lofoten is known for its distinctive scenery with mountains and peaks, open sea and sheltered bays, beaches and untouched lands.

About the Curators: Francesco Urbano Ragazzi is an Italian curatorial duo founded in Paris in 2008. The team developed The Internet Saga, a research platform and cycle of exhibitions that started with a homonymous solo show by Jonas Mekas (2015), and culminated with the exhibition Hillary: The Hillary Clinton Emails by Kenneth Goldsmith (2019), both presented in unconventional contexts on the occasion of the Venice Biennale. Francesco Urbano Ragazzi has also curated projects and exhibitions for MMCA (Seoul), Iscp (New York), Centro Ricerca Castello di Rivoli (Turin), Centre d’Art Contemporain (Gèneve), La Loge (Brussels), La Casa Encendida (Madrid), Institut Français (Paris), Futura (Prague), Ruya Foundation (Baghdad), Emirates Foundation (Abu Dhabi), among others. Since 2017, the team is directing the archive of feminist artist Chiara Fumai; in this capacity they curated the first monograph of her work. In 2021 the duo co-edited FUORI 1971-1974, an anthology dedicated to the first gay liberation movement in Italy.