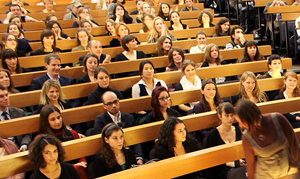 France’s most prestigious art history college, the École du Louvre in Paris, is getting a revamp with backing from a private donor who has given €2.8m towards the renovations.

France’s most prestigious art history college, the École du Louvre in Paris, is getting a revamp with backing from a private donor who has given €2.8m towards the renovations. According to The Art Newspaper France, more than 1,800 students enrol annually at the École du Louvre which is housed in the Aile de Flore of the Palais du Louvre and overseen by the French ministry of culture.

Majid Boustany, a Lebanese-born property developer who is a Swiss national and lives in Monaco, is the patron financing the radical reconfiguration of the college, which was founded in 1882. He has also donated two works by the UK sculptor Antony Gormley which will go on show in the college library.

The library of the École du Louvre, which also offers courses in archaeology and museology, has been reconfigured as part of the architectural masterplan overseen by the Dutch architect Heleen Hart. The library has been enlarged under the plan and now has 156 reader posts rather than 100 while the archive section has also been renovated.

A new research center for the college’s 72 doctoral students also forms part of the refurbishment, which will be unveiled next month. “Research [students] never had a dedicated space, a place for meetings and the exchange of information,” says Claire Barbillon, the director of the École du Louvre. “I’ve always wanted a research hub on this site.”

Boustany is the president of the Francis Bacon MB Art Foundation, a non-profit organization based in Monaco which encompasses more than “3,000 items, including the largest collection of the artist’s early paintings and furniture” says the organization website.

He says in a statement: “I must confess that my decision to fund this ambitious program comes from my passion for the most Francophile of English artists, Francis Bacon. He lived and worked in Paris and was a regular visitor to the city’s museums, including the Louvre.” Boustany first became interested in Bacon while studying in London in the 1990s, when he saw the Tate’s triptych Three Studies for Figures at the Base of a Crucifixion, 1944. Since 2016, Boustany has also funded an annual scholarship at the École du Louvre centered on Bacon.

“By offering works of art to the school library, I wanted to bring art into this fundamental place in the life of a student. Two sculptures by the UK artist Antony Gormley, Witness VII and Witness VIII, will come to [occupy] this place dedicated to study and research, and a large easel that belonged to Francis Bacon, from his Parisian studio, will be placed in the library hall,” he adds. A portrait of Bacon in his Reece Mews studio in London dating from 1977 will be displayed at the entrance of the new research centre.