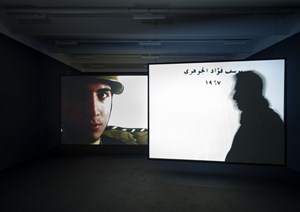 Lawrence Abu Hamdan is best known for investigating the politics of sound, whether that be “ear witness” accounts gathered from prisoners tortured at Syria’s Saydnaya prison under Assad’s regime, or critiques of the use of accent tests to validate asylum claims in Europe. Through works of video, sculpture, performance, and installation, Abu Hamdan persistently interrogates the interpretive limits and truth claims of audio information. He studies how sound roots itself in memory, how it is inseparable from vision, and ultimately, as the artist states, how it is uncontainable: “part of the messiness of the world.”

This solo exhibition presents the first iterations of Abu Hamdan’s body of work exploring reincarnation as a medium for justice. In the gallery, visitors encounter Once Removed (2019), a dual-channel video installation chronicling the artist in conversation with Bassel Abi Chahine, a 31-year-old writer and historian who has amassed a startlingly comprehensive inventory of rare objects, photographs and interviews of the People’s Liberation Army (PLA) from the Lebanese Civil War (1975-1990). Abi Chahine’s obsessive collection and research was pursued to help contextualize what he describes as unexplainable memories and flashbacks of a war he was not alive to experience. Through the course of his archiving, Abi Chahine recognizes himself as the reincarnation of a young soldier, Yousef Fouad Al Jawhary, who was killed during the conflict on February 26, 1984, at the age of 17.

Since the close of the Lebanese Civil War, it was deemed in the national interest to suppress details about the conflict in order to avoid inciting further tensions. Abu Hamdan and Abi Chahine’s generation, therefore, grew up with very little knowledge about the war, and were actively discouraged from seeking it out. Yet former PLA soldiers desired to share their personal photographs and artefacts with Abi Chahine because they believed him to be the reincarnation of their comrade. As the scenography of Once Removed suggests, Abi Chahine’s research and his reincarnation are inextricably entangled.

Audain Gallery’s street-facing windows present For the Otherwise Unaccounted (2020), a series of vinyl prints and text panels that draw upon the work of psychiatrist Dr. Ian Stevenson, particularly his 1997 book Reincarnation and Biology: The Etiology of Birthmarks. Resulting from extensive fieldwork across Asia and Africa, and in Turkey, Lebanon, and Alaska, Reincarnation and Biology explores claims of reincarnation in which birthmarks on reincarnated subjects correspond to circumstances of their deaths in previous lives. Entwining forensic analysis, scientific hypotheses and narrative prose, Stevenson’s book examines a community of people around the world for whom violence and injustice have otherwise escaped the historical record. Abu Hamdan’s prints of birthmarks, adhered directly to the window glass and casting shadows of themselves on the walls behind them, highlight the ways in which testimony is stored in the body. Birthmarks become archives: the only surviving remnants of such historical erasure and endured traumas as forced religious conversions, the destruction of language and property and colonial occupation. In this way, Abu Hamdan’s new work attempts to make both visible and audible a new category of witness, one that has yet to be accepted into the generation of history.

This exhibition is co-presented by SFU's School for the Contemporary Arts' Audain Visual Artist in Residence program.

Currently based in Dubai, Lawrence Abu Hamdan holds a PhD from Goldsmiths College University of London. He was a fellow at the Gray Centre for Arts and Inquiry at the University of Chicago, and the Vera List Centre for Art and Politics at the New School (New York). Abu Hamdan has exhibited his work at the 58th Venice Biennale, the 11th Gwanju Biennale, and the 13th and 14th Sharjah Biennial, as well as at the Witte De With (Rotterdam), Tate Modern Tanks (London), Chisenhale Gallery (London), Hammer Museum (Los Angeles), Portikus (Frankfurt), The Showroom (London), and Casco Art Institute (Utrecht). His works are part of collections at the Museum of Modern Art (New York), Solomon R. Guggenheim Museum (New York), Van AbbeMuseum (Eindhoven), Centre Pompidou (Paris), and Tate Modern (London). Abu Hamdan was awarded the 2019 Edvard Munch Art Award, the 2016 Nam June Paik Award for new media, and in 2017 his film Rubber Coated Steelwon the Tiger short film award at the Rotterdam International Film Festival. For the 2019 Turner Prize, Abu Hamdan, together with nominated artists Helen Cammock, Oscar Murillo, and Tai Shani, formed a temporary collective in order to be jointly granted the award.